Mammoths were hairy elephants of the genus Mammuthus. They lived in Europe until 4,500 years ago, and were adapted to cold climate. They were killed off by hunters and climate change.

They lived in the Pliocene and Pleistocene. In the Pleistocene, northern Europe was covered with ice and tundra. There were a series of ice ages, which allowed the mammoths to spread across the land.

Mammoth were hunted by early humans, who used spears, and cut them up with hand axes. Their frozen flesh has been analysed for its DNA sequence. 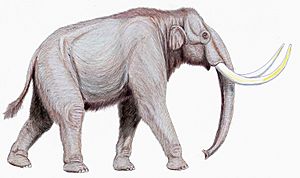 Restoration of a steppe mammoth

Like their modern relatives, mammoths were quite large. The largest known species reached heights in the region of 4 m (13.1 ft) at the shoulder and weights of up to 8 tonnes (8.8 short tons), while exceptionally large males may have exceeded 12 tonnes (13.2 short tons). However, most species of mammoth were only about as large as a modern Asian elephant (which are about 2.5 m to 3 m high at the shoulder, and rarely exceeding 5 tonnes). Both sexes bore tusks. A first, small set appeared at about the age of six months, and these were replaced at about 18 months by the permanent set. Growth of the permanent set was at a rate of about 2.5 to 15.2 cm (1 to 6 in) per year.

Size of various mammoth species compared with a human

Based on studies of their close relatives, the modern elephants, mammoths probably had a gestation period of 22 months, resulting in a single calf being born. Their social structure was probably the same as that of African and Asian elephants, with females living in herds headed by a matriarch, whilst bulls lived solitary lives or formed loose groups after sexual maturity.

Scientists discovered and studied the remains of a mammoth calf, and found that fat greatly influenced its form, and enabled it to store large amounts of nutrients necessary for survival in temperatures as low as −50 °C (−58 °F). The fat also allowed the mammoths to increase their muscle mass, allowing the mammoths to fight against enemies and live longer.

Depending on the species or race of mammoth, the diet differed somewhat depending on location, although all mammoths ate similar things. For the Columbian mammoth, M. columbi, the diet was mainly grazing. American Columbian mammoths fed primarily on cacti leaves, trees, and shrubs. These assumptions were based on mammoth feces and mammoth teeth. Mammoths, like modern day elephants, have hypsodont molars. These features also allowed mammoths to live an expansive life because of the availability of grasses and trees.

For the Mongochen mammoth, its diet consisted of herbs, grasses, larch, and shrubs, and possibly alder. These inferences were made through the observation of mammoth feces, which scientists observed contained non-arboreal pollen and moss spores.

The Yamal baby mammoth Lyuba, found in 2007 in the Yamal Peninsula in Western Siberia, suggests that baby mammoths, as do modern baby elephants, ate the dung of adult animals. The evidence to show this is that the dentition (teeth) of the baby mammoth had not yet fully developed to chew grass. Furthermore, there was an abundance of ascospores of coprophilous fungi from the pollen spectrum of the baby's mother. Coprophilous fungi are fungi that grow on animal dung and disperse spores in nearby vegetation, which the baby mammoth would then consume. Spores might have gotten into its stomach while grazing for the first few times. Coprophagy may be an adaptation, serving to populate the infant's gut with the needed microbiome for digestion.

Mammoths alive in the Arctic during the Last Glacial Maximum consumed mainly forbs, such as Artemisia; graminoids were only a minor part of their diet. 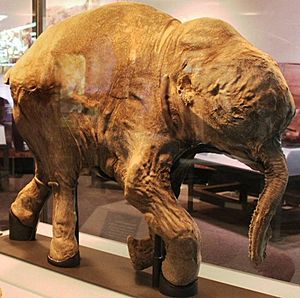 Lyuba, a mummified woolly mammoth calf, at the Field Museum of Natural History in Chicago

The woolly mammoth (M. primigenius) was the last species of the genus. Most populations of the woolly mammoth in North America and Eurasia, as well as all the Columbian mammoths (M. columbi) in North America, died out around the time of the last glacial retreat, as part of a mass extinction of megafauna in northern Eurasia and the Americas. Until recently, the last woolly mammoths were generally assumed to have vanished from Europe and southern Siberia about 12,000 years ago, but new findings show some were still present there about 10,000 years ago. Slightly later, the woolly mammoths also disappeared from continental northern Siberia. A small population survived on St. Paul Island, Alaska, up until 3750 BC, and the small mammoths of Wrangel Island survived until 1650 BC. Recent research of sediments in Alaska indicates mammoths survived on the American mainland until 10,000 years ago.

A definitive explanation for their extinction has yet to be agreed upon. The warming trend (Holocene) that occurred 12,000 years ago, accompanied by a glacial retreat and rising sea levels, has been suggested as a contributing factor. Forests replaced open woodlands and grasslands across the continent. The available habitat would have been reduced for some megafaunal species, such as the mammoth. However, such climate changes were nothing new; numerous very similar warming episodes had occurred previously within the ice age of the last several million years without producing comparable megafaunal extinctions, so climate alone is unlikely to have played a decisive role. The spread of advanced human hunters through northern Eurasia and the Americas around the time of the extinctions, however, was a new development, and thus might have contributed significantly. 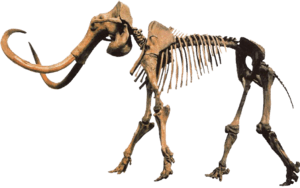 Whether the general mammoth population died out for climatic reasons or due to overhunting by humans is controversial. During the transition from the Late Pleistocene epoch to the Holocene epoch, there was shrinkage of the distribution of the mammoth because progressive warming at the end of the Pleistocene epoch changed the mammoth's environment. The mammoth steppe was a periglacial landscape with rich herb and grass vegetation that disappeared along with the mammoth because of environmental changes in the climate. Mammoths had moved to isolated spots in Eurasia, where they disappeared completely. Also, it is thought that Late Paleolithic and Mesolithic human hunters might have affected the size of the last mammoth populations in Europe. There is evidence to suggest that humans did cause the mammoth extinction, although there is no definitive proof. It was found that humans living south of a mammoth steppe learned to adapt themselves to the harsher climates north of the steppe, where mammoths resided. It was concluded that if humans could survive the harsh north climate of that particular mammoth steppe then it was possible humans could hunt (and eventually extinguish) mammoths everywhere. Another hypothesis suggests mammoths fell victim to an infectious disease. A combination of climate change and hunting by humans may be a possible explanation for their extinction. Homo erectus is known to have consumed mammoth meat as early as 1.8 million years ago, though this may mean only successful scavenging, rather than actual hunting. Later humans show greater evidence for hunting mammoths; mammoth bones at a 50,000-year-old site in South Britain suggest that Neanderthals butchered the animals, while various sites in Eastern Europe dating from 15,000 to 44,000 years old suggest humans (probably Homo sapiens) built dwellings using mammoth bones (the age of some of the earlier structures suggests that Neanderthals began the practice). However, the American Institute of Biological Sciences notes that bones of dead elephants, left on the ground and subsequently trampled by other elephants, tend to bear marks resembling butchery marks, which have allegedly been misinterpreted as such by archaeologists.

Many hypotheses also seek to explain the regional extinction of mammoths in specific areas. Scientists have speculated that the mammoths of Saint Paul Island, an isolated enclave where mammoths survived until about 8,000 years ago, died out as the island shrank by 80–90% when sea levels rose, eventually making it too small to support a viable population. Similarly, genome sequences of the Wrangel Island mammoths indicate a sharp decline in genetic diversity, though the extent to which this played a role in their extinction is still unclear. Another hypothesis, said to be the cause of mammoth extinction in Siberia, comes from the idea that many may have drowned. While traveling to the Northern River, many of these mammoths broke through the ice and drowned. This also explains bones remains in the Arctic Coast and islands of the New Siberian Group.

All content from Kiddle encyclopedia articles (including the article images and facts) can be freely used under Attribution-ShareAlike license, unless stated otherwise. Cite this article:
Mammoth Facts for Kids. Kiddle Encyclopedia.