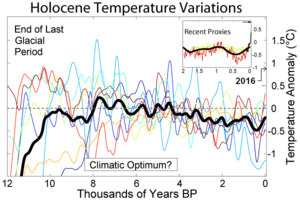 Temperature variations during the Holocene 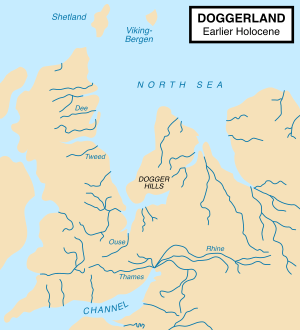 Paleogeographic reconstruction of the North Sea appr. 9000 years ago during the young Holocene and after the end of the last ice age.

The Holocene is the present geological epoch. It is the second epoch of the Quaternary and the seventh of the Cainozoic. It started around 11,000 years ago after the last ice age. We are currently going through a non-ice age warm stage in Earth's history.

The Holocene climatic optimum (HCO) was a warm period from about 9,000 to 5,000 years BP. The interesting thing about this is, despite recent global warming, we are still below this warm period (see diagram).

This warm period was followed by a gradual decline until about two millennia ago.

The Holocene is also called the Recent epoch. It is the second stage in the Quaternary period.

The Holocene marks the end of the previous series of ice ages in the Pleistocene. It started about 11,700 years ago when the temperatures rose quickly from the previous level.

During the early Holocene, there were many extinctions amongst larger mammals. This is because of human hunting and climate change.

At this time the Bering bridge connecting Russia and Alaska melted. Also the land bridge between China and Japan melted (starting the Jōmon period), as well as many land bridges between islands in Southeast Asia.

All content from Kiddle encyclopedia articles (including the article images and facts) can be freely used under Attribution-ShareAlike license, unless stated otherwise. Cite this article:
Holocene Facts for Kids. Kiddle Encyclopedia.