The North Sea is a sea in northern Europe. It is part of the Atlantic ocean. The North Sea is between Norway and Denmark in the east, Scotland and England in the west, Germany, the Netherlands, Belgium and France in the south.

The Skagerrak connects the North Sea to the Baltic Sea. In the south, the North Sea becomes the English Channel, a sea between England and France. This is called the Dover Straits and is very busy with ships.

The border between the North Sea and the Skagerrak is at an imagined line between Lindesnes in Norway, and Hanstholm in Denmark. In the North, the North sea is open towards the Atlantic. The border between the two is an imagined line from Northern Scotland, to the Shetlands, and then to Ålesund in Norway. According to the Oslo-Paris Treaty of 1962 it is a bit more to the west and the north though. The treaty puts it at 5° East longitude, and 62° North latitude. That is at the parallel of the Geirangerfjord in Norway.

On average, the North Sea has a depth of only 94 metres. About 80 million people live near the North Sea, at most 150 km away from the coast. Together with the English Channel in the south, the southern North Sea is the busiest body of water in the world.

Rivers that drain into it

Well-known rivers that drain into the North Sea include the Tay (at Dundee), the Forth (at Edinburgh), the Tyne (South Shields), the Wear (at Sunderland), the Tees (near Middlesbrough), the Elbe (at Cuxhaven), the Weser (at Bremerhaven), the Rhine and Meuse or Maas (at Rotterdam), the Scheldt (at Flushing or Vlissingen), the Thames, and the Humber (at Hull).

The Kiel Canal, one of the world's busiest artificial waterways, connects the North Sea with the Baltic.

Its name comes from its relationship to the land of the Frisians (see Frisia). They live directly to the south of the North Sea, and to the west of the East Sea (Oostzee, the Baltic Sea), the former South Sea (Zuiderzee, today's IJsselmeer) and the today reclaimed Middle Sea (Middelzee). But the spread of the name could also be from the view of the cities of the Hanseatic League. Some of its main cities, like Lübeck, Bremen or Hamburg had the same view.

In classical times this body of water was also called the Oceanum Germanicum or Mare Germanicum, meaning German Ocean or Sea. This name was commonly used in English and other languages along with the name North Sea, until the early eighteenth century. By the late nineteenth century, German Sea was a rare, scholarly usage even in Germany. In Danish the North Sea is also named Vesterhavet (besides Nordsøen), meaning Western Ocean because it is west of Denmark. 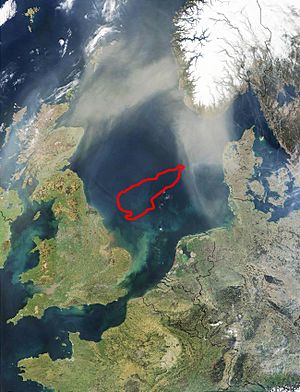 Satellite picture of the north sea. The area marked in red is the Doggerbank.

Most of the North sea is on the European Continental shelf. On average, the depth is about 93 to 94 meters only. In the south it is very shallow, only 25 to 35 meters. In the north in the bathyal zone north of the Shetlands, this depth increases to between 100 and 200 metres. In the south, the depth is at most 50 metres. An exception to this is the Norwegian Trench. It is deepest there, with a depth of 725 metres. The most shallow part of it is a sand bank called Dogger Bank. In the southern part, there are many sand banks.

Looking at the satellite picture it is easy to see the geographic divisions of the North Sea:

The Dogger Bank covers an area about half the size of the Netherlands. There, the North Sea has a depth of between 13 and 20 metres only. The area is very famous for fishing. With some storms there are even waves breaking there.

About 200 km east of the Scottish city of Dundee there are more trenches, known collectively as the Devil's hole. Generally, the water is about 90 meters deep there. The trenches very often are only a few kilometers in length. In these trenches, the depth increases to up to 230 meters.

In the Dover Strait the water is about 30 meters deep. At the end of the English Channel, this depth increases to about 100 meters.

In the 1960s geologists found large areas of oil and natural gas under the North Sea. Most of the oil fields are owned by the United Kingdom and Norway but some belong to Denmark, the Netherlands and Germany. Drilling began in the 1960s and led to a famous argument between England and Scotland about how the revenue (money) from the oil should be spent. 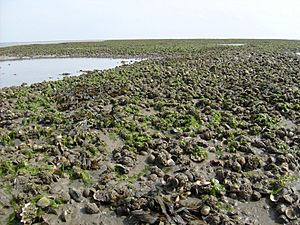 Pacific oysters, blue mussels and cockles in the Wadden Sea in the Netherlands

Copepods and other zooplankton are plentiful in the North Sea. These tiny organisms are crucial elements of the food chain supporting many species of fish. Over 230 species of fish live in the North Sea. Cod, haddock, whiting, saithe, plaice, sole, mackerel, herring, pouting, sprat, and sandeel are all very common and are fished commercially. Due to the various depths of the North Sea trenches and differences in salinity, temperature, and water movement, some fish such as blue-mouth redfish and rabbitfish reside only in small areas of the North Sea.

Crustaceans are also commonly found throughout the sea. Norway lobster, deep-water prawns, and brown shrimp are all commercially fished, but other species of lobster, shrimp, oyster, mussels and clams all live in the North Sea. Recently non-indigenous species have become established including the Pacific oyster and Atlantic jackknife clam.

The coasts of the North Sea are home to nature reserves including the Ythan Estuary, Fowlsheugh Nature Preserve, and Farne Islands in the UK and the Wadden Sea National Parks in Denmark, Germany and the Netherlands. These locations provide breeding habitat for dozens of bird species. Tens of millions of birds make use of the North Sea for breeding, feeding, or migratory stopovers every year. Populations of black legged kittiwakes, Atlantic puffins, northern fulmars, and species of petrels, gannets, seaducks, loons (divers), cormorants, gulls, auks, and terns, and many other seabirds make these coasts popular for birdwatching. 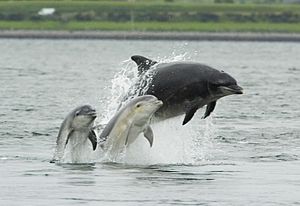 A female bottlenose dolphin with her young in Moray Firth, Scotland

The North Sea is also home to marine mammals. Common seals, and harbour porpoises can be found along the coasts, at marine installations, and on islands. The very northern North Sea islands such as the Shetland Islands are occasionally home to a larger variety of pinnipeds including bearded, harp, hooded and ringed seals, and even walrus. North Sea cetaceans include various porpoise, dolphin and whale species. 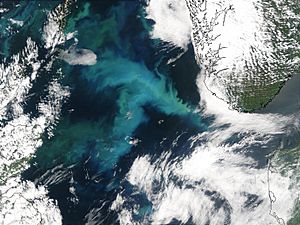 Phytoplankton bloom in the North Sea

Plant species in the North Sea include species of wrack, among them bladder wrack, knotted wrack, and serrated wrack. Algae, macroalgal, and kelp, such as oarweed and laminaria hyperboria, and species of maerl are found as well. Eelgrass, formerly common in the entirety of the Wadden Sea, was nearly wiped out in the 20th century by a disease. Similarly, sea grass used to coat huge tracts of ocean floor, but have been damaged by trawling and dredging have diminished its habitat and prevented its return. Invasive Japanese seaweed has spread along the shores of the sea clogging harbours and inlets and has become a nuisance.

All content from Kiddle encyclopedia articles (including the article images and facts) can be freely used under Attribution-ShareAlike license, unless stated otherwise. Cite this article:
North Sea Facts for Kids. Kiddle Encyclopedia.