A ship is a large watercraft that travels the world's oceans and other sufficiently deep waterways, carrying passengers or goods, or in support of specialized missions, such as defense, research and fishing. Historically, a "ship" was a sailing vessel with at least three square-rigged masts and a full bowsprit. Ships are generally distinguished from boats, based on size, shape, load capacity, and tradition.

Ships have been important contributors to human migration and commerce. They have supported the spread of colonization and the slave trade, but have also served scientific, cultural, and humanitarian needs. After the 15th century, new crops that had come from and to the Americas via the European seafarers significantly contributed to the world population growth. Ship transport is responsible for the largest portion of world commerce.

The first ships used oars or the wind (or both) to make them move.

From about 4000BC the Ancient Egyptians were making wooden sail boats. By 1200BC the Phoenicians and Greeks had begun to make bigger sailing ships which were about 30 metres (100 feet) long and could carry 90-180 tonnes of cargo. The Romans made even bigger ships which could carry up to 1,000 people and 1,000 tonnes of cargo. The 8th century saw the rise of the Vikings, who were famous for their "longships" and which were mainly used for raiding other countries, but also for trading. The longships had flat bottoms so they could move in shallow (not deep) rivers.

Sailing ships were used for thousands of years, but they were very important in wars and trade from the 1500's to the 1800's. The Chinese admiral Zheng He commanded a fleet of 'treasure ships' on seven voyages all over Asia up to East-Africa in the early fifteenth century. These ships probably were about 130 m (450 ft) long and up to 50 m (180 ft) wide. That makes them about twice the size of the largest European ships in the sixteenth century. The most successful and largest fleet in the 17th century was the Dutch fleet (see the Netherlands). For trade and transport the Dutch often used a particular kind of trading ship, called a flute (fluit in Dutch). Transport of people and cargo on sailing ships continued until the 1920's. 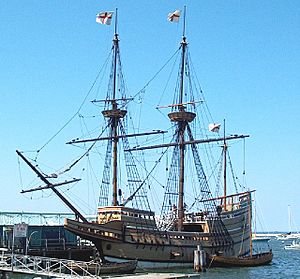 Copy of the ship Mayflower

Some famous ships from this era include:

The age of steam

In the 19th century, steam ships were invented.

At one time, the steamships Titanic, Olympic, and Britannic were the largest ships in the world, Titanic sank on her maiden voyage after hitting an iceberg, becoming one of the most famous shipwrecks of all time, the Olympic was Titanic 's nearly identical twin, and actually set sail before Titanic and was scrapped in the 1930's after a very successful career including her being a passenger liner and a warship in World War I. The Britannic was the largest of these three sister ships, and was supposed to be more grand and elegant than the Titanic, but before she set sail on her maiden voyage, WWI broke out and she was stripped of her elegant furniture and elaborate paneling and became a hospital ship. During her term as a hospital ship, she was sunk by either a mine or torpedo, no one knows for sure. The Titanic lies at the bottom of the North Atlantic Ocean, off the coast of Nova Scotia, and the Britannic lies in the Aegean Sea, off the coast of the Island of Kea.

The world's largest ship is the Prelude, owned by Shell. It is being built on Geoje Island, South Korea. It is 488m long and has the internal capacity greater than the total volume of four large aircraft carriers. What it will do is collect natural gas off the coast of Australia, and liquify it. When liquified, the hydrocarbon takes up 600 times less space than its gas. Smaller tankers will take the liquid gas to its buyers. The ship will do liquifying and temporary storage, which is usually done on land. Shell believes this justifies the cost of the ship.

The shipping yard builds all kinds of structures for the oil industry. It employs 30,000 workers.

Some names for parts of a ship

Some types of ships

All content from Kiddle encyclopedia articles (including the article images and facts) can be freely used under Attribution-ShareAlike license, unless stated otherwise. Cite this article:
Ship Facts for Kids. Kiddle Encyclopedia.