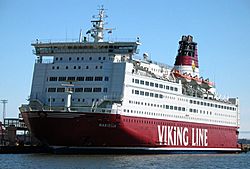 A large ferry in Finland. 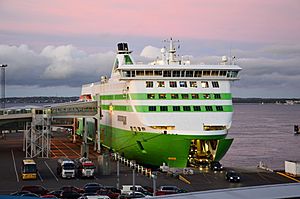 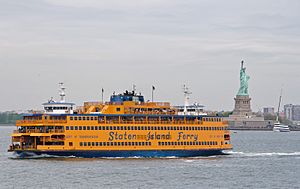 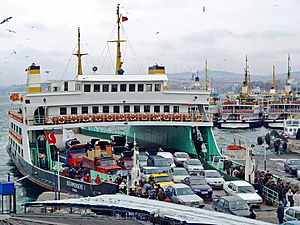 A ferry is a boat or ship that is used to take people, vehicles or goods across large bodies of water, such as seas, lakes and rivers.

In many places around the world, ferries are very important for public transport. Some of these places can only be reached by ferry, because they have no roads or railways with bridges or tunnels that join them to nearby places, nor do they have any locations at which to land airplanes, whether it is an airport or only an airfield.

Sometimes the trip in a ferry is free, and sometimes it must be paid for. Many ferries also carry cars, some even have own rail tracks, allowing the ferry to carry trains on board.

The word 'ferry' can also mean 'to take someone or something by ferry'.

The Herald of Free Enterprise disaster, in which 193 people died near Zeebrugge in 1987, was one of the worst ferry accidents of recent times. It was caused by a crew member forgetting to close the bow doors of the ferry.

Ferry designs depend on the length of the route, the passenger or vehicle capacity required, speed requirements and the water conditions the craft must deal with. 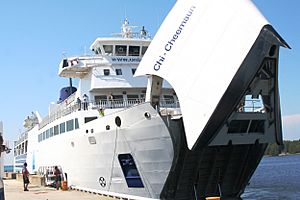 Double-ended ferries have interchangeable bows and sterns, allowing them to shuttle back and forth between two terminals without having to turn around. Well-known double-ended ferry systems include the Staten Island Ferry, Washington State Ferries, Star Ferry, several boats on the North Carolina Ferry System, and the Lake Champlain Transportation Company. Most Norwegian fjord and coastal ferries are double-ended vessels. All ferries from southern Prince Edward Island to the mainland of Canada are double-ended. Some ferries in Sydney, Australia and British Columbia are also double-ended. In 2008, BC Ferries launched three of the largest double-ended ferries in the world.

Hydrofoils have the advantage of higher cruising speeds, succeeding hovercraft on some English Channel routes where the ferries now compete against the Eurotunnel and Eurostar trains that use the Channel Tunnel. Passenger-only hydrofoils also proved a practical, fast and relatively economical solution in the Canary Islands but were recently replaced by faster catamaran "high speed" ferries that can carry cars. Their replacement by the larger craft is seen by critics as a retrograde step given that the new vessels use much more fuel and foster the inappropriate use of cars in islands already suffering from the impact of mass tourism. 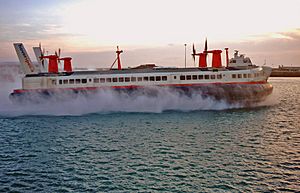 Hovercraft were developed in the 1960s and 1970s to carry cars. The largest was the massive SR.N4 which carried cars in its centre section with ramps at the bow and stern between England and France. The hovercraft was superseded by catamarans which are nearly as fast and are less affected by sea and weather conditions. Only one service now remains, a foot passenger service between Portsmouth and the Isle of Wight run by Hovertravel. 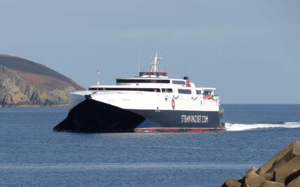 Since 1990 high speed Catamarans have revolutionised ferry services, replacing hovercraft, hydrofoils and conventional monohull ferries. In the 1990s there were a variety of builders, but the industry has consolidated to two builders of large vehicular ferries between 60 and 120 metres. Incat of Hobart, Tasmania favours a Wave-piercing hull to deliver a smooth ride, while Austal of Perth, Western Australia builds ships based on SWATH designs. Both these companies also compete in the smaller river ferry industry with a number of other ship builders.

Stena Line once operated the largest catamarans in the world, the Stena HSS class, between the United Kingdom and Ireland. These waterjet-powered vessels, displaced 19,638 tonnes, accommodating 375 passenger cars and 1,500 passengers. Other examples of these super-size catamarans are found in the Brittany Ferries fleet with the Normandie Express and the Normandie Vitesse. 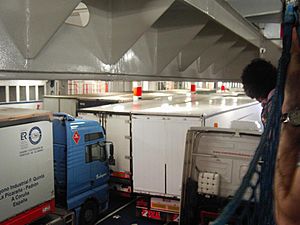 Lorries preparing to unload from the Pont-Aven, the Brittany Ferries flagship

Roll-on/roll-off ferries (RORO) are large conventional ferries named for the ease by which vehicles can board and leave.

A cruiseferry is a ship that combines the features of a cruise ship with a roll-on/roll-off ferry. 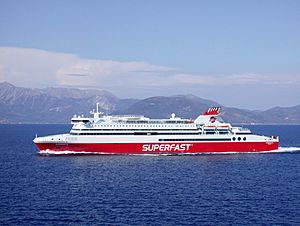 Fast RoPax ferries are conventional ferries with a large garage intake and a relatively large passenger capacity, with conventional diesel propulsion and propellers that sail over 25 knots (46 km/h; 29 mph). Pioneering this class of ferries was Attica Group, when it introduced Superfast I between Greece and Italy in 1995 through its subsidiary company Superfast Ferries. Cabins, if existent, are much smaller than those on cruise ships. 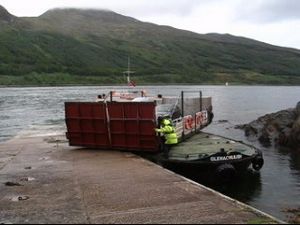 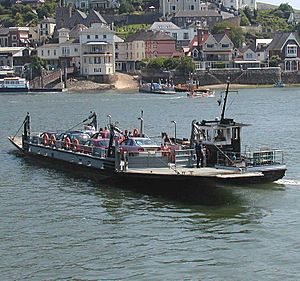 The Lower Kingswear to Dartmouth ferry, Devon, England. The pontoon carries eight cars and is towed across the River Dart by a small tug. Two ropes connect the tug to the pontoon.

Pontoon ferries carry vehicles across rivers and lakes and are widely used in less-developed countries with large rivers where the cost of bridge construction is prohibitive. One or more vehicles are carried on a pontoon with ramps at either end for vehicles to drive on and off. Cable ferries (next section) are usually pontoon ferries, but pontoon ferries on larger rivers are motorised and able to be steered independently like a boat. 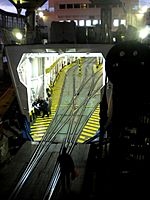 Train and car ferry between Calabria and Sicily, Italy

A train ferry is a ship designed to carry railway vehicles. Typically, one level of the ship is fitted with railway tracks, and the vessel has a door at the front and/or rear to give access to the wharves.

Foot ferries are small craft used to ferry foot passengers, and often also cyclists, over rivers. These are either self-propelled craft or cable ferries. Such ferries are for example to be found on the lower River Scheldt in Belgium and in particular the Netherlands. Regular foot ferry service also exists in the capital of the Czech Republic, Prague, and across the Yarra River in Melbourne, Australia at Newport. Restored, expanded ferry service in the Port of New York and New Jersey uses boats for pedestrians only. 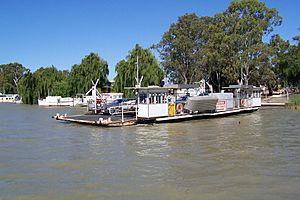 Very short distances may be crossed by a cable or chain ferry, which is usually a pontoon ferry (see above), where the ferry is propelled along and steered by cables connected to each shore. Sometimes the cable ferry is human powered by someone on the boat. Reaction ferries are cable ferries that use the perpendicular force of the current as a source of power. Examples of a current propelled ferry are the four Rhine ferries in Basel, Switzerland. Cable ferries may be used in fast-flowing rivers across short distances.

Free ferries operate in some parts of the world, such as at Woolwich in London, England (across the River Thames); in Amsterdam, Netherlands (across the IJ waterway); in New York Harbor, connecting Manhattan to Staten Island; along the Murray River in South Australia, and across many lakes in British Columbia. Many cable ferries operate on lakes and rivers in Canada, among them a cable ferry that charges a toll operates on the Rivière des Prairies between Laval-sur-le-Lac and Île Bizard in Quebec, Canada.

In the 1950s and 1960s, travel on an "air ferry" was possible—airplanes, often ex-military, specially equipped to take a small number of cars in addition to "foot" passengers. These operated various routes including between the United Kingdom and Continental Europe. Companies operating such services included Channel Air Bridge, Silver City Airways, and Corsair.

The term is also applied to any "ferrying" by air, and is commonly used when referring to airborne military operations.

All content from Kiddle encyclopedia articles (including the article images and facts) can be freely used under Attribution-ShareAlike license, unless stated otherwise. Cite this article:
Ferry Facts for Kids. Kiddle Encyclopedia.