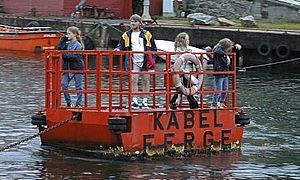 A cable ferry (known as chain ferry, swing ferry, floating bridge, or punt) is a ferry that is guided (and in some cases propelled) across a river by cables connected to both shores. Early cable ferries used either rope or steel chains, with the latter resulting in the name "chain ferry". Both of these were replaced by wire cable in the 19th century.

All content from Kiddle encyclopedia articles (including the article images and facts) can be freely used under Attribution-ShareAlike license, unless stated otherwise. Cite this article:
Cable ferry Facts for Kids. Kiddle Encyclopedia.