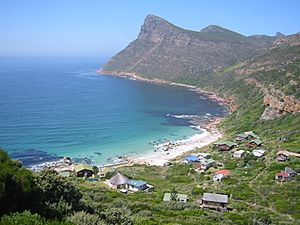 A shore or shoreline is the land at the edge of a large body of water, such as an ocean or river. Where the water is a sea, the shore is also called a "coast".

Shores are influenced by the topography of the surrounding landscape, as well as by erosion caused by water, such as waves. The geological makeup of rock and soil controls the type of shore which is created. Erosion of sedimentary soils can make a sandy or pebbly shore, usually called a beach.

A shore includes the intertidal zone that is alternately exposed and covered by waves and tides.

A shore will often have a lighthouse on it to help ships in the sea.

All content from Kiddle encyclopedia articles (including the article images and facts) can be freely used under Attribution-ShareAlike license, unless stated otherwise. Cite this article:
Shore Facts for Kids. Kiddle Encyclopedia.