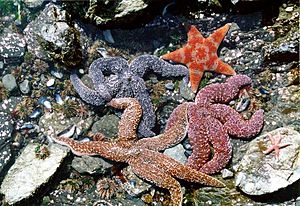 Intertidal zones are coastal areas, the space between high and low tides. They often have rock, sand or mud that is under water at high tide, and above water at low tide.

Rock pools are common on some shores. These areas is often home to many species of crabs, shellfish, shallow water fish and many other animals. Many environmental things affect these areas, for example, waves, sunlight, salinity, wind, and water tide. About 300,000 species have been found in the intertidal zone. These species have to tolerate the pounding of waves, the changes in temperature, and the drying out at low tide.

The most common organisms in the intertidal zone are small and relatively uncomplicated. This is for a variety of reasons; firstly the supply of water which marine organisms require to survive is intermittent. Secondly, the wave action around the shore can wash away or dislodge poorly suited or adapted organisms. Thirdly, because of the intertidal zone's high exposure to the sun the temperature range can be extreme from very hot to near freezing in frigid climates (with cold seas). Lastly, the salinity is much higher in the intertidal zone because salt water trapped in rock pools evaporates leaving behind salt deposits. These four factors make the intertidal zone an extreme environment in which to live.

The high tide zone is flooded during high tide only, and is a highly saline environment. The abundance of water is not high enough to sustain large amounts of vegetation, although some does survive. The predominant organisms in this subregion are sea anemones, barnacles, brittle stars, chitons, crabs, green algae, isopods, limpets, mussels, sea stars, snails, whelks and some marine vegetation. The high tide zone can also contain rock pools inhabited by small fish and larger seaweeds.

This sub-region is mostly submerged - it is only exposed at the point of low tide and for a longer period of time during extremely low tides. This area is teeming with life; the most notable difference with this sub-region to the others is that there is much more marine vegetation, especially seaweeds. There is also a great biodiversity. Organisms in this zone generally are not well adapted to periods of dryness and temperature extremes. 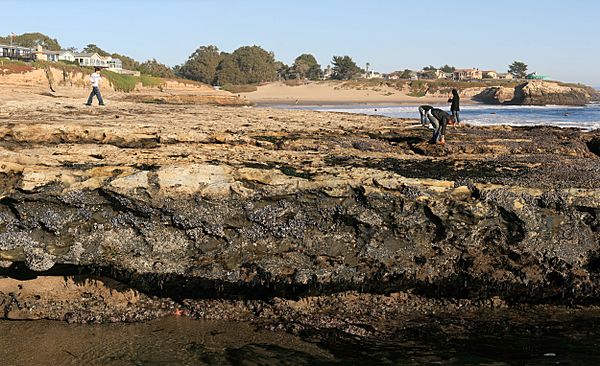 All content from Kiddle encyclopedia articles (including the article images and facts) can be freely used under Attribution-ShareAlike license, unless stated otherwise. Cite this article:
Intertidal zone Facts for Kids. Kiddle Encyclopedia.