Brittle stars are Echinoderms of the Class Ophiuroidea. The adults are superficially like starfish, but they are a different group, with different larvae. Like other echinoderms, they do have a skeleton of calcareous plates, and radial symmetry. There are about 1500 different species.

Usually they have 5 arms, which can grow long, up to 60 cm, in the largest species. The central disk of brittle stars can be three to eight inches in diameter. Unlike starfish, they live deeper in the ocean. Ophiuroids are known even from abyssal (>6000 m) depths. However, brittle stars are also common members of reef communities, where they hide under rocks and even within other living organisms. Generally, brittle stars live below 500m of depth.

There are two related groups of Ophiuroids: the Ophiurida (brittle stars) and the basket stars (Eurialida). Basket stars usually live in the deeper parts of the range. Brittle stars are mostly scavengers and detrivores, able to catch some small prey on occasion.

Many brittle stars are more fragile than starfish, which is how they got their name. When they are picked up, their arms may fall off. This might make the animal seem brittle, but they often do this as a defense to escape from predators. 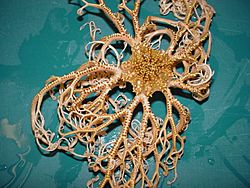 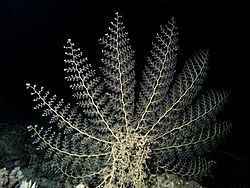 Basket star feeding at night in the Red Sea

Brittle stars do not use their tube feet for movement, but instead use muscles in their long, thin arms to go around rocks. Ophiurids move quickly when disturbed, and are faster movers than starfish. In living ophiuroids the plates are linked by longitudinal muscles. Ophiurid arms only move horizontally. The way their plates interlock prevents the arms from moving in any other plane.p64 In contrast, basket star arms can move vertically. These movement patterns are distinct, and separate the groups.

Basket stars (Euryalids) are large brittle stars with many rays. Their arms branch, and can be moved in any direction. This distinguishes them from the Ophiurids. Basket stars may be capable of suspension feeding, using the mucus coating on their arms to trap plankton and bacteria. They extend one arm out and use the other four as anchors. The arms form so many branches that they are almost feathery on the ends. They get their name because when they stretch their rays out to catch plankton, they look like the bottom of a basket.

Basket stars can be large and heavy, the biggest Ophiuroids. The largest, Gorgonocephalus stimpsoni, weigh up to 5 kg (11 lbs) and has arms 70cms long, with a disk diameter of 14 cm.

All content from Kiddle encyclopedia articles (including the article images and facts) can be freely used under Attribution-ShareAlike license, unless stated otherwise. Cite this article:
Brittle star Facts for Kids. Kiddle Encyclopedia.