Réunion (French: La Réunion) is an island of France. It is also a region of France and an overseas department of France, meaning France owns the island nation. It is in the Indian Ocean east of Madagascar, about 200 km (125 miles) southwest of Mauritius. Its capital is Saint-Denis. The highest point in La Reunion is La piton des neiges. The island is also famous for its black beaches, even though people think that there are white beaches. The island is 63 kilometres (39 mi) long; 45 kilometres (28 mi) wide; and covers 2,512 square kilometres (970 sq mi). It is similar to the island Hawaii as both are above hotspots in the Earth's crust.

The Piton de la Fournaise, a shield volcano on the eastern end of Réunion Island, rises more than 2,631 metres (8,632 ft) above sea level and is sometimes called a sister to Hawaiian volcanoes because of the similarity of climate and volcanic nature. It has erupted more than 100 times since 1640 and is under constant monitoring. It most recently erupted on 2 January 2010. [10] Before that, the most noticeable was during April 2007, when the lava flow was estimated at 3,000,000 cubic metres (3,900,000 cu yd) per day. [11] The Piton de la Fournaise is created by a hotspot volcano, which also created the Piton des Neiges and the islands of Mauritius and Rodrigues.

The Piton des Neiges volcano, the highest point on the island at 3,070 m (10,070 ft) above sea level, is northwest of the Piton de la Fournaise. Collapsed calderas and canyons are south west of the mountain. While the Piton de la Fournaise is one of Earth's most active volcanoes, the Piton des Neiges is dormant. Its name is French for "peak of snows", but snowfall on the summit of the mountain is rare. The slopes of both volcanoes are heavily forested. Cultivated land and cities like the capital city of Saint-Denis are concentrated on the surrounding coastal lowlands. Offshore, part of the west coast is characterised by a coral reef system. Réunion also has three calderas: the Cirque de Salazie, the Cirque de Cilaos and the Cirque de Mafate. The last is accessible only on foot or by helicopter. 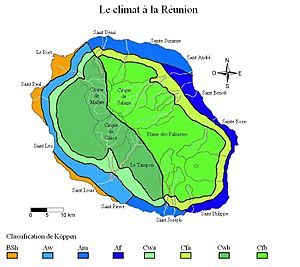 The climate in Réunion is tropical, but temperature moderates with elevation. The weather is cool and dry from May to November, but hot and rainy from November to April. Precipitation levels vary greatly within the island, with the east being much wetter than the west. More than 6 m of rain a year fall on some parts of the east and less than 1 m a year falls on the west coast. Réunion holds the world records for the most rainfall in 12-, 24-, 72- and 96-hour periods.

Réunion hosts many tropical and unique beaches. They are often equipped with barbecues, amenities, and parking spaces. Hermitage Beach is the most extensive and best preserved lagoon in Réunion Island and a popular snorkelling location. It is a white sand beach lined with casuarina trees under which the locals often organise picnics. La Plage des Brisants is a well-known surfing spot, with many athletic and leisurely activities taking place. Each November, a film festival is also organised in La Plage des Brisants. Movies are projected on a large screen in front of a crowd. Beaches at Boucan Canot are surrounded by a stretch of restaurants that particularly cater to tourists. L'Étang-Salé on the west coast is a particularly unique beach as it is covered in black sand consisting of tiny fragments of basalt. This occurs when lava contacts water, it cools rapidly and shatters into sand and fragmented debris of various size. Much of the debris is small enough to be considered sand. Grand Anse is a tropical white-sand beach lined with coconut trees in the south of Réunion, with a rock pool built for swimmers, a pétanque playground, and a picnic area. Le Vieux Port in Saint Philippe is a green-sand beach consiting of tiny olivine cristals, formed by the 2007 lava flow, making it one of the youngest beaches on Earth.

Since 2010, Réunion is home to a UNESCO World Heritage Site that covers about 40% of the island's area and coincides with the central zone of the Réunion National Park.

Réunion is home to a variety of birds such as the white-tailed tropicbird (French: paille en queue). Its largest land animal is the panther chameleon, Furcifer pardalis. Much of the west coast is ringed by coral reef which harbours, among other animals, sea urchins, conger eels, and parrot fish. Sea turtles and dolphins also inhabit the coastal waters. Humpback whales migrate north to the island from the Antarctic waters annually during the Southern Hemisphere winter (June–September) to breed and feed, and can be routinely observed from the shores of Réunion during this season. At least 19 species formerly endemic to Réunion have become extinct following human colonisation. For example, the Réunion giant tortoise became extinct after being slaughtered in vast numbers by sailors and settlers of the island.

Between 2010 and 2017, 23 shark attacks occurred in the waters of Réunion, of which nine were fatal. In July 2013, the Prefect of Réunion Michel Lalande announced a ban on swimming, surfing, and bodyboarding off more than half of the coast. Lalande also said 45 bull sharks and 45 tiger sharks would be culled, in addition to the 20 already killed as part of scientific research into the illness ciguatera.

All content from Kiddle encyclopedia articles (including the article images and facts) can be freely used under Attribution-ShareAlike license, unless stated otherwise. Cite this article:
Réunion Facts for Kids. Kiddle Encyclopedia.