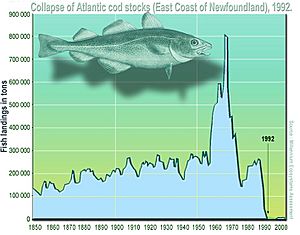 Atlantic cod stocks were severely overfished in the 1970s and 1980s, leading to their abrupt collapse in 1992 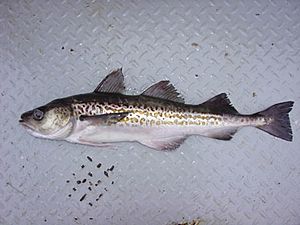 So much fish is caught that there are too few adults of certain species left. With cod, for example, the greatest production of eggs is from large females. But these are caught, and the average size of spawning females has gone down. Eventually this gets so that the production of eggs is significantly reduced. The artificial selection of large fish has gradually reduced the size of mature females.

The Northwest Atlantic cod has been regarded as heavily overfished throughout its range, resulting in a crash in the fishery in the United States and Canada during the early 1990s.

Consumers can get information about the conservation status of the seafood available to them.

All content from Kiddle encyclopedia articles (including the article images and facts) can be freely used under Attribution-ShareAlike license, unless stated otherwise. Cite this article:
Overfishing Facts for Kids. Kiddle Encyclopedia.