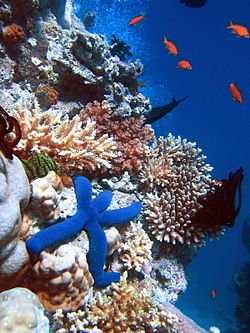 Some of the biodiversity of the Great Barrier Reef, off Queensland, Australia

A coral reef is a type of biotic reef developing in tropical waters. Although corals are major contributors to the overall framework and bulk material comprising a coral reef, the organisms most responsible for reef growth against the constant assault by ocean waves are algae, especially, although not entirely, species of red algae.

Water temperature of 20–28 °C (68–82 °F) is an optimal range for proper growth and health of coral reefs. Coral reefs are found in all oceans of the world, except the Arctic Ocean, generally between the Tropic of Cancer and the Tropic of Capricorn, because reef-building corals live in these waters.

Such reefs take a variety of forms, defined as follows:

The Importance of Coral Reefs

Coral reefs provide a natural habitat and massive protection for different species of fish. They are not plants; they are living organisms that provide an environment for fishes to breed. Without them, fishes in the ocean are homeless.

According to professor Christie’s lecture, corals are colonial organisms that need to be exposed to sun, in order for them to grow. The corals also influence the amount of carbon dioxide in the ocean. This is a major process that acts as a 'carbon sink' for excess carbon dioxide in the atmosphere, as well as maintaining an environment of exceptionally high biodiversity despite relatively poor nutrient availability.

Coral reefs are fragile ecosystems. Because corals need warm, sunlit water to live, they often grow close to the top of the water. Being so close to land makes them often be damaged by poisons and dirt that can come from boats and the land nearby. Dirt makes the water more cloudy, which makes the sunlight less. Poisons can bleach and kill corals. Also, they are hard for ships to see, but easy to hit, which makes ships often run into the coral, damaging both the boats and coral. Because of this, many countries are trying to lessen the kinds of building that usually happen near beaches that have coral reefs nearby, and be more careful about the boats that go around reefs.

The building block of coral reefs are the skeletons of generations of hard corals, composed of calcium carbonate. As each polyp dies, it leaves behind its skeletal structure, upon which the next generation of polyps grow, enlarging the reef. Grazing fish (such as parrotfish), sea urchins, sponges and other organisms break down the coral skeletons into fine fragments, which settle into spaces in the reef structure.

Coral reefs are among the most diverse and productive biological communities on Earth. The reef structure provides habitat and shelter to a wide variety of marine plants and animals - it is estimated that a quarter of marine life lives in or around coral reefs. Additionally, corals act as water filters, increasing water quality in the vicinity of the reef.

Offshore, the reef structure acts as a breakwater, protecting coastlines from ocean waves. The wide variety of flora and fauna has turned some coral reefs and the islands and coastal areas near them into popular tourist attractions.

In December 2004, United States Geological Survey (USGS) researchers announced the confirmation of the discovery of the deepest coral reef ever found in the United States. The reef is in the Pulley Ridge area, a north-south-trending drowned barrier island, more than 60 miles (100 km) long, approximately 40 miles (70 km) west of Dry Tortugas National Park. It is up to three miles wide and about 20 miles long (5 km wide and 30 km long), and located at a depth that ranges from 200 to 250 feet (60 to 80 m). Unlike most coral reefs, which tend to grow vertically, Pulley Ridge coral grows flat, an adaptation to the limited penetration of light at that depth to increase surface area exposed to sunlight.

Similar deep reefs occur in other parts of the world, e.g. the Mingulay reef complex and the Darwin Mounds located off the west of Scotland in about 150 metres of water.

It is estimated that about 60% of the world’s reefs are at risk due to destructive, human-related activities. The threat to the health of reefs is particularly strong in Southeast Asia, where an enormous 80% of reefs are considered endangered. Various efforts are being made to grow coral reefs and coral, a difficult task; they are fragile, react to small changes in their biological environment.

Coral reefs are being grown using a process called "mineral accretion". Applying a low voltage to a metallic structure causes limestone to build on the metal, upon which baby coral can attach, settle and feed. This greatly speeds the coral reef growth process. A coalition of scientists known as the Global Coral Reef Alliance, GCRA, has been growing coral reefs, as well as teaching the techniques. Numerous photos of the results are available at their website.

A fringing reef can take ten thousand years to form, and an atoll can take up to 30 million years

Most present-day coral reefs were formed after the last ice age when melting ice caused the sea level to rise and flood the continental shelves. This means they are less than 10,000 years old. As coral reef communities were established on the shelves, they built reefs that grew upwards, keeping pace with the rise in sea level. Reefs that did not keep pace became drowned reefs, covered by so much water that there was insufficient light for further survival.

Coral reefs are also found in the deep sea away from the continental shelves, around oceanic islands and as atolls. The vast majority of these ocean coral islands are volcanic in origin. The few exceptions have tectonic origins where plate movements have lifted the deep ocean floor on the surface.

All content from Kiddle encyclopedia articles (including the article images and facts) can be freely used under Attribution-ShareAlike license, unless stated otherwise. Cite this article:
Coral reef Facts for Kids. Kiddle Encyclopedia.