A sponge is a member of the phylum Porifera. It is a simple animal with many cells, but no mouth, muscles, heart or brain. It is sessile: it cannot move from place to place the way most other animals can. A sponge is an animal that grows in one spot like most plants do. Nevertheless, sponges are quite successful.

The basic body plan is a jelly-like layer sandwiched between two thin layers of cells. Their bodies are full of pores and channels allowing water to circulate through them. Most of them feed on bacteria and other microorganisms. A few of them eat tiny crustaceans.

There are more than 10,000 species of sponge. Most sponges live in the ocean. A few live in fresh water. All sponges take in water through pores (little holes) in their bodies. The water goes out through a big tube in the center. Most sponges filter (take out) little bits of food from the water going through their bodies. Animals that get food this way are called filter feeders.

What makes them different

Sponges are simple animals. A few things make them different from other animals.

There are four classes of sponges. The difference between these kinds is in how their skeleton is made.

Sponges are sessile, they live in one place, where they are fixed to the ground. A few sponges can change their position, they can move at speeds of between 1 mm and 4 mm a day. They do this like amoebae. A few species can contract their whole bodies. Many can close their openings/holes.

A few species live in waters where there is very little food available. They have therefore changed, and became predators. They eat small crustaceans and other small animals. Most of these sponges belong to the family Cladorhizidae, but a few members of the Guitarridae and Esperiopsidae are also carnivores. In most cases little is known about how they actually capture prey. Some species are thought to use either sticky threads or hooked spicules. Most carnivorous sponges live in deep waters, up to 8,840 metres (5.49 mi), and the development of deep-ocean exploration techniques is expected to lead to the discovery of several more. However one species has been found in Mediterranean caves at depths of 17-23m alongside the more usual filter feeding sponges. The cave-dwelling predators capture crustaceans under 1 millimetre (0.039 in) long by entangling them with fine threads, digest them by enveloping them with further threads over the course of a few days, and then return to their normal shape; there is no evidence that they use venom.

Most known carnivorous sponges have completely lost the water flow system and choanocytes. However the genus Chondrocladia uses a highly modified water flow system to inflate balloon-like structures that are used for capturing prey.

A report in 1997 described how bottlenose dolphins in Shark Bay used sponges as tools: A dolphin will attach a marine sponge to its rostrum (snoutlike projection). It is thought the sponge is used to protect the rostrum when the dolphin is looking for food in the sandy sea bottom but scientists have not confirmed this. The behaviour, known as sponging, has only been seen in this bay, and is almost exclusively shown by females. A study in 2005 concluded that mothers teach the behaviour to their daughters, and that all the sponge-users are closely related. This suggests that it is a fairly recent innovation. Dolphins also use sponges as an exfoliator, rubbing their skin against the sponge attached to the rock to get rid of their old/dry skin. 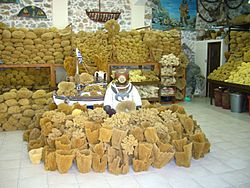 The calcium carbonate or silica spicules of most sponges make them too rough for most uses, but two genera, Hippospongia and Spongia, have soft, entirely fibrous skeletons. Early Europeans used soft sponges for many purposes including padding for helmets, portable drinking utensils and municipal water filters. Until synthetic sponges were invented, they were also used as cleaning tools and for painting. In the 20th century, overfishing is a problem. This has caused the animals, as well as the industry behind it to be close to extinction.

Many objects with sponge-like textures are now made of substances that do not come from poriferans. Synthetic "sponges" include personal and household cleaning tools.

The luffa "sponge", also spelled loofah, which is commonly sold for use in the kitchen or the bath, is not derived from an animal but from the fibrous "skeleton" of a gourd (Cucurbitaceae).

All content from Kiddle encyclopedia articles (including the article images and facts) can be freely used under Attribution-ShareAlike license, unless stated otherwise. Cite this article:
Sponge Facts for Kids. Kiddle Encyclopedia.