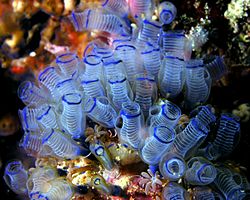 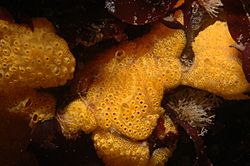 Colonies of tunicate Botrylloides violaceus. Note new zooid buds within colonies and along margins of colonies. 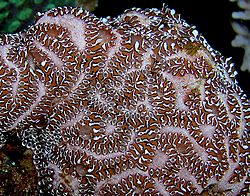 Tunicates (sea squirts or Urochordata) are a subphylum of the Chordates.

They are sea filter-feeders: they live mainly on plankton. They are called tunicates because the adult form is covered by a leathery tunic. This tunic supports and protects the animal. The adults are sessile, stuck to rocks.

Many tunicates are colonial or semi-colonial in their adult stage. They are quite a large group, containing about 3,000 species. The adults live mostly on the sea floor, in the littoral zone.

The sea squirt has two openings in its small body. One opening, called the oral siphon, sucks water into the animal; the other opening, called the atrial siphon, squirts water out of the animal. Inside is a little basket-like sieve which traps food: so these sea squirts are filter feeders. The Sea squirt can close the holes in its siphons, like a drawstring can close the opening in a bag.

When in its larval state, it looks like a tadpole and is sometimes called a tadpole larva. Like many sea creatures, a sea squirt larva looks very different from an adult sea squirt. The larva swims for a short time and then attaches itself to something on the sea floor, like a rock, transforming into its adult form. It usually stays in one place for the rest of its life.

Tunicates are more closely related to craniates (hagfish, lampreys, jawed vertebrates) than to lancelets, echinoderms, hemichordates, or other invertebrates.

Chemical substances which might help fight diseases like cancer or various viruses have been found in some species.

Scientists have also found out that some species can heal some damage done to them, over several generations. A similar process might be possible for humans.

All content from Kiddle encyclopedia articles (including the article images and facts) can be freely used under Attribution-ShareAlike license, unless stated otherwise. Cite this article:
Tunicate Facts for Kids. Kiddle Encyclopedia.