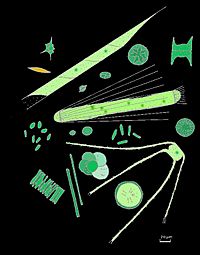 Phytoplankton include tiny one-celled eukaryotes which do photosynthesis

Noctiluca scintillans is a dinoflagellate which eats up other tiny plankton

Northern krill, the favourite food of the baleen whales

Plankton are drifting organisms that live in the surface layers of the ocean. They live in the top layer of the ocean, called the epipelagic zone. They are not strong enough to swim against ocean currents. The term is in contrast to nekton, who can control their movements. There are three groups:

Plankton are important in the ocean's food chain.

Aside from representing the bottom few levels of a food chain that supports commercially important fisheries, plankton ecosystems play a role in the biogeochemical cycles of many important chemical elements, including the ocean's carbon cycle.

Primarily by grazing on phytoplankton, zooplankton provide carbon to the planktic foodweb, either respiring it to provide metabolic energy, or upon death as biomass or detritus. Organic material tends to be denser than seawater, so it sinks into open ocean ecosystems away from the coastlines, transporting carbon along with it. This process, called the biological pump, is one reason that oceans constitute the largest carbon sink on Earth. However, it has been shown to be influenced by increments of temperature.

It might be possible to increase the ocean's uptake of carbon dioxide (CO2) generated through human activities by increasing plankton production through seeding, primarily with the micronutrient iron. However, this technique may not be practical at a large scale. Ocean oxygen depletion and resultant methane production (caused by the excess production remineralising at depth) is one potential drawback. 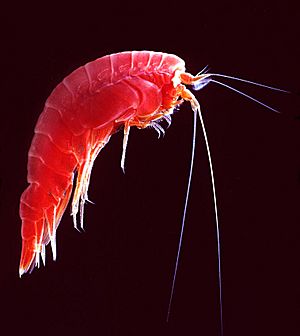 The growth of phytoplankton populations is dependent on light levels and nutrient availability. The chief factor limiting growth varies from region to region in the world's oceans. On a broad scale, growth of phytoplankton in the oligotrophic tropical and subtropical gyres is generally limited by nutrient supply, while light often limits phytoplankton growth in subarctic gyres. Environmental variability at multiple scales influences the nutrient and light available for phytoplankton, and as these organisms form the base of the marine food web, this variability in phytoplankton growth influences higher trophic levels. For example, at interannual scales phytoplankton levels temporarily plummet during El Niño periods, influencing populations of zooplankton, fishes, sea birds, and marine mammals.

The effects of anthropogenic warming on the global population of phytoplankton is an area of active research. Changes in the vertical stratification of the water column, the rate of temperature-dependent biological reactions, and the atmospheric supply of nutrients are expected to have important impacts on future phytoplankton productivity. Additionally, changes in the mortality of phytoplankton due to rates of zooplankton grazing may be significant.

Freshly hatched fish larvae are also plankton for a few days, as long as it takes before they can swim against currents.

Zooplankton are the initial prey item for almost all fish larvae as they switch from their yolk sacs to external feeding. Fish rely on the density and distribution of zooplankton to match that of new larvae, which can otherwise starve. Natural factors (e.g., current variations) and man-made factors (e.g. river dams) can strongly affect zooplankton, which can in turn strongly affect larval survival, and therefore breeding success.

The importance of both phytoplankton and zooplankton is also well-recognized in pond fish farming. Plankton population based pond management strategies for fish rearing have been practised by traditional fish farmers for decades, illustrating the importance of plankton even in man-made environments.

All content from Kiddle encyclopedia articles (including the article images and facts) can be freely used under Attribution-ShareAlike license, unless stated otherwise. Cite this article:
Plankton Facts for Kids. Kiddle Encyclopedia.