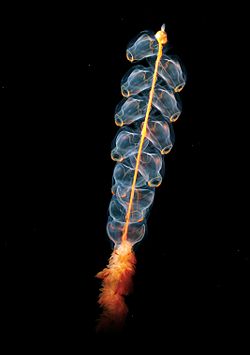 Marrus orthocanna is a species of pelagic siphonophore, a colonial animal composed of a complex arrangement of zooids, some of which are polyps and some medusae. It lives in the Arctic and other cold, deep waters, swimming independently in mid-ocean.

The Siphonophores are an order of cnidarian invertebrates in the class Hydrozoa. The Portuguese man o' war is an example.

A siphonophore is not a single animal. It is a colony of four kinds of zooids. Zooids are very small, highly modified individuals. All the zooids in a colony are genetically identical. These zooids are specialized polyps and medusoids.

Though structurally similar to other cnidarians, the zooids do not live by themselves: they are attached to each other. Each type of zooid is not self-sufficient. It depends for survival on the others doing what it cannot do by itself.

So close do the zooids fit together that the colony looks like a single individual. It was a triumph of 19th century biology to discover the real nature of the siphonophores.

All content from Kiddle encyclopedia articles (including the article images and facts) can be freely used under Attribution-ShareAlike license, unless stated otherwise. Cite this article:
Siphonophore Facts for Kids. Kiddle Encyclopedia.