Cnidaria is a phylum containing over 10,000 species of animals found exclusively in aquatic (freshwater and marine) environments: they are predominantly marine species. Their distinguishing feature is cnidocytes, specialized cells that they use mainly for capturing prey.

Their bodies consist of mesoglea, a non-living jelly-like substance, sandwiched between two layers of epithelium that are mostly one cell thick. They have two basic body forms: swimming medusae and sessile polyps, both of with mouths surrounded by tentacles that bear cnidocytes. Both forms have a single orifice and body cavity that are used for digestion and respiration.

There are five classes in the group. Jellyfish occur in four of the classes.

Most cnidarians prey on organisms ranging in size from plankton to animals several times larger than themselves. Many are preyed on by other animals including starfish, sea slugs, fish and turtles. While reef-forming corals are almost entirely restricted to warm and shallow marine waters, other cnidarians can be found at great depths, in polar regions, and in freshwater.

Medusae swim by a form of jet propulsion: muscles, especially inside the rim of the bell, squeeze water out of the cavity inside the bell, and the springiness of the mesoglea powers the recovery stroke. Since the tissue layers are very thin, they provide too little power to swim against currents and just enough to control movement within currents.

Hydras and some sea anemones can move slowly over rocks and sea or stream beds by various means: creeping like snails, crawling like inchworms, or by somersaulting. A few can swim clumsily by waggling their bases.

Cnidarians are generally thought to have no brains or even central nervous systems. However, they do have integrative areas of neural tissue that could be considered some form of centralization. There are no respiratory organs, and both cell layers absorb oxygen from and expel carbon dioxide into the surrounding water. All cnidarians can regenerate, allowing them to recover from injury. 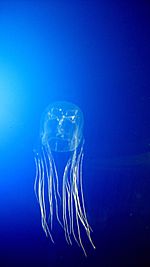 Jellyfish stings killed about 1,500 people in the 20th century, and cubozoans are particularly dangerous. On the other hand, Coral reefs have long been economically important as providers of fishing grounds, protectors of shore buildings against currents and tides, and more recently as centers of tourism. However, they are vulnerable to over-fishing, mining for construction materials, pollution, and damage caused by tourism.

The "sea wasp" Chironex fleckeri has been described as the world's most venomous jellyfish and is held responsible for 67 deaths, although it is difficult to identify the animal as it is almost transparent. Most stingings by cause only mild symptoms. Seven other box jellies can cause a set of symptoms called Irukandji syndrome, which takes about 30 minutes to develop, and from a few hours to two weeks to disappear. Hospital treatment is usually required, and there have been a few deaths.

Some large jellyfish are considered a delicacy in East and Southeast Asia. are commonly consumed in Japan, Korea and Southeast Asia. In parts of the range, fishing industry is restricted to daylight hours and calm conditions in two short seasons, from March to May and August to November. The commercial value of jellyfish food products depends on the skill with which they are prepared, and "Jellyfish Masters" guard their trade secrets carefully. Jellyfish is very low in cholesterol and sugars.

All content from Kiddle encyclopedia articles (including the article images and facts) can be freely used under Attribution-ShareAlike license, unless stated otherwise. Cite this article:
Cnidaria Facts for Kids. Kiddle Encyclopedia.