Corals are formed by small animals, the polyps of the phylum Cnidaria. They are marine, either on continental shelves or round oceanic islands. They live in colonies.

All the polyps in a colony are zooids: they are all clones, genetically identical. Colonies of the same species release gametes together, over one, two or three nights around a full moon.

Each coral animal is like a little bag. The opening on top is the mouth. Tentacles (little arms) around the mouth carry stinging nematocysts, which paralyse the small animals eaten by the coral polyps.

Coral usually grows in tropical oceans. A few corals grow in cold water, like the oceans around the British Isles and Norway.

Most corals get energy and nutrients from symbiosis with photosynthetic unicellular algae called zooxanthellae. Such corals need sunlight and grow in clear, shallow water, typically at depths less than 60 metres (200 ft). 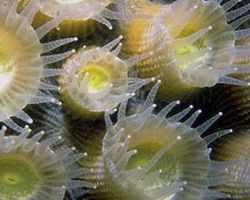 Many corals (and some other cnidaria) live with zooxanthellae of the genus Symbiodinium, which are dinoflagellates. Usually, each polyp harbours one species of algae. By photosynthesis, these provide energy for the coral, and help calcification.

The algae benefit from a safe place to live and consume the polyp's carbon dioxide and nitrogenous waste. Due to the strain the algae can put on the polyp, the coral often ejects the algae. Mass ejections are known as coral bleaching, because the algae contribute to coral's brown coloration. Ejection increases the polyp's chance of surviving short-term stress—they can regain algae, possibly of a different species, at a later time. If the stressful conditions persist, the polyp eventually dies.

A coral reef is a place where many corals grow. The reef makes good places for many other animals, such as fish, crabs, clams, and sponges.

Each coral animal secretes calcium carbonate around itself. This makes the solid structure of the colony. When the animal dies, new polyps live on top of the older structure. The rock they make is also called coral.

They are called coral skeletons. Each different kind of coral colony builds a different kind of skeleton, so that colonies can be shaped like a brain, a mushroom, a cabbage, or many other things. With all these corals gathered together building skeletons around themselves, large coral formations are made. Together, all the coral formations in one place make up a coral reef.

Coral can also be used as jewellery.

All content from Kiddle encyclopedia articles (including the article images and facts) can be freely used under Attribution-ShareAlike license, unless stated otherwise. Cite this article:
Coral Facts for Kids. Kiddle Encyclopedia.