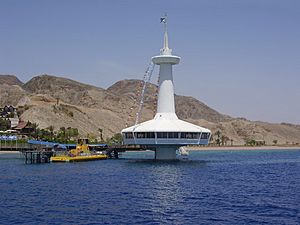 Entrance to the underwater observatory in Eilat

Eilat is at the southern end of the Negev Desert and the northern end of the Gulf of Aqaba or Gulf of Eilat on the Red Sea. It is an important port for Israel. Ships bring many products to Israel from the Far East and other places here.

Many tourists from Israel and other countries visit Eilat to enjoy the desert views, beaches and all-year warm weather. The temperature can easily reach more than 40 °C (104 °F) in summer and 21 °C (70 °F) in winter. The sea water is between 20 and 26 °C (68 and 79 °F). Coral reefs grow in the sea near Eilat and people can see them by scuba diving or from an underwater observatory (Coral World Underwater Observatory). Kings City is an amusement park in Eilat.

All content from Kiddle encyclopedia articles (including the article images and facts) can be freely used under Attribution-ShareAlike license, unless stated otherwise. Cite this article:
Eilat Facts for Kids. Kiddle Encyclopedia.