For the province, see Province of Arica. For the region, see Region of Arica and Parinacota.

Arica is a commune and a port city with a population of 196,590 in the Arica Province of northern Chile's Arica y Parinacota Region. It is Chile's most northern city; it is at only 18 km (11 mi) south of the border with Peru.

The city is the capital since 2007 of both the Arica Province and the Arica and Parinacota Region. It was founded on 25 April 1541 by Lucas Martínez Vegaso as San Marcos de Arica. 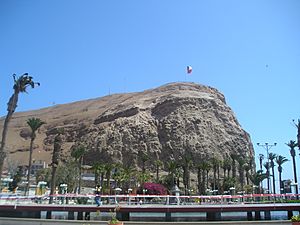 Arica is on the Pacific Ocean coast at the bend of South America's western coast known as the Arica Bend or Arica Elbow. The city is on the foot of the Morro of Arica, or just El Morro, a steep and tall hill, 139 m (456 ft) above sea level.

The city is at 2,051 km (1,274 mi) from Santiago, the national capital. The mouths of two rivers: the Lluta and the San José de Azapa rivers, are near the city.

The commune has an area of 4,799.4 km2 (1,853.1 sq mi). It borders with Peru (Tacna province) on the north, the Parinacota province on the east, the Camarones commune on the south and the Pacific Ocean on the west.

The Köppen climate classification type for the climate at Arica is a "mild desert climate" and of the subtype "BWh/BWn". Arica is known as the more dry inhabited place on Earth, at least as measured by rainfall: the average amount of precipitation for the year is 0.76 mm (0.03 in).

All content from Kiddle encyclopedia articles (including the article images and facts) can be freely used under Attribution-ShareAlike license, unless stated otherwise. Cite this article:
Arica Facts for Kids. Kiddle Encyclopedia.