Citroën is car manufacturer based in France. It was founded by André-Gustave Citroën in 1919 and it became the first mass-production car company outside the USA and pioneered the modern concept of creating a sales and services network that complements the motor car.

Citroën were innovators in car design. Their Traction Avant (pictured) had the first mass production of three revolutionary features that are still in use today. They are: a unitary body with no separate frame, four-wheel independent suspension, and front-wheel drive.

Later on, in the 1950s, Citroën developed a remarkable type of suspension. A high-pressure hydraulic system was used in over 9 million Citroën cars. They included the DS, SM, GS, CX, BX, XM, Xantia, C5, and C6. Self-levelling is the principal benefit – the car kept a constant ride height above the road. It adjusted to the passenger and cargo load, and gave a very soft suspension. This type of suspension smooths out road irregularities without disturbing the occupants. It is often compared to riding on a 'magic carpet' for this reason. 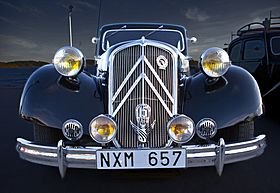 The Citroën Traction Avant, a classic car of the 1940s

All content from Kiddle encyclopedia articles (including the article images and facts) can be freely used under Attribution-ShareAlike license, unless stated otherwise. Cite this article:
Citroën Facts for Kids. Kiddle Encyclopedia.