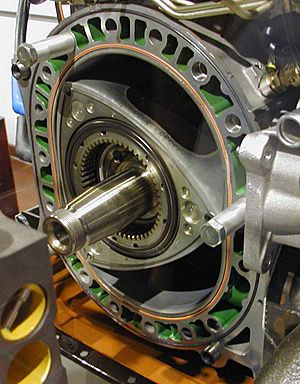 A cut-away of a Wankel engine shown at the Deutsches Museum in Munich, Germany

The Wankel Engine is a type of combustion engine. It is sometimes called a rotary engine. The Wankel engine is better than an engine of the reciprocating piston design because it is more compact and simple. However, so far, nobody has found a good enough solution to the fact that oil (lubricant) has to be burnt along with the fuel. This causes pollution issues, besides wasting oil. This is why most vehicles still use piston engines.

All content from Kiddle encyclopedia articles (including the article images and facts) can be freely used under Attribution-ShareAlike license, unless stated otherwise. Cite this article:
Wankel engine Facts for Kids. Kiddle Encyclopedia.