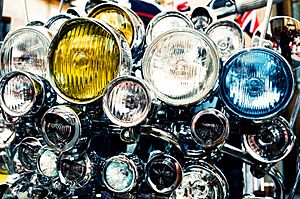 A motor scooter's front with an impractical number and variety of headlamps, added for decorative purposes and characteristic of Mod culture

A headlamp is a light bulb mounted on the front of a machine. Normally it is mounted on a car. It shines forward. It can be turned on and off. It is used to see ahead of the machine so it wouldn't drive into trees or telephone poles. Incandescent bulbs and a variant known as halogen bulbs are the most common types. They are normally bright.

Pop up headlamps on a Mazda 323F

Modern headlamps are electrically operated, positioned in pairs, one or two on each side of the front of a vehicle. A headlamp system is required to produce a low and a high beam, which may be achieved either by an individual lamp for each function or by a single multifunction lamp.

High beams (called "main beams" or "full beams" or "driving beams" in some countries) cast most of their light straight ahead, maximizing seeing distance, but producing too much glare for safe use when other vehicles are present on the road. Because there is no especial control of upward light, high beams also cause backdazzle from fog, rain and snow due to the retroreflection of the water droplets.

Low beams (called "dipped beams" in some countries) have stricter control of upward light, and direct most of their light downward and either rightward (in right-traffic countries) or leftward (in left-traffic countries), to provide safe forward visibility without excessive glare or backdazzle. 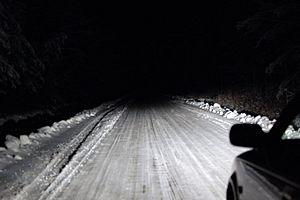 Low beam (dipped beam, passing beam, meeting beam) headlamps provide a distribution of light designed to provide adequate forward and lateral illumination with limits on light directed towards the eyes of other road users, to control glare. This beam is intended for use whenever other vehicles are present ahead. The international ECE Regulations for filament headlamps . 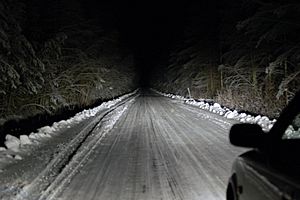 Top view of the illuminated area of European lamps.

High beam (main beam, driving beam, full beam) headlamps provide a bright, centre-weighted distribution of light with no particular control of light directed towards other road users' eyes. As such, they are only suitable for use when alone on the road, as the glare they produce will dazzle other drivers. International ECE Regulations permit higher-intensity high-beam headlamps than are allowed under North American regulations.

Most low-beam headlamps are specifically designed for use on only one side of the road. Headlamps for use in left-traffic countries have low-beam headlamps that "dip to the left"; the light is distributed with a downward/leftward bias to show the driver the road and signs ahead without blinding oncoming traffic. Headlamps for right-traffic countries have low beams that "dip to the right", with most of their light directed downward/rightward.

Within Europe, when driving a vehicle with RH-traffic headlamps in a LH-traffic country or vice versa for a limited time (as for example on vacation or in transit), it is a legal requirement to adjust the headlamps temporarily so that the wrong-side hot spot of the beam does not dazzle oncoming drivers. This may be achieved by adhering blackout strips or plastic prismatic lenses to a designated part of the lens, but some varieties of the projector-type headlamp can be made to produce a proper left- or right-traffic beam by shifting a lever or other movable element in or on the lamp assembly.

Because wrong-side-of-road headlamps blind oncoming drivers and do not adequately light the driver's way, and blackout strips and adhesive prismatic lenses reduce the safety performance of the headlamps, most countries require all vehicles registered or used on a permanent or semipermanent basis within the country to be equipped with headlamps designed for the correct traffic-handedness.

Some countries require automobiles to be equipped with automatic daytime running lamps (DRL), which are intended to increase the conspicuity of vehicles in motion during the daytime. DRL may consist of the manual or automatic illumination of the low beams at full or reduced intensity, or the high beams at reduced intensity, or may not involve the headlamps at all.

All content from Kiddle encyclopedia articles (including the article images and facts) can be freely used under Attribution-ShareAlike license, unless stated otherwise. Cite this article:
Headlamp Facts for Kids. Kiddle Encyclopedia.