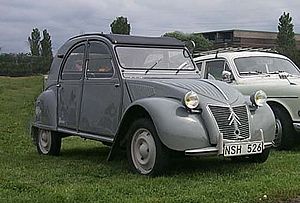 It was a cleverly designed basic car with a fabric roof, a soft suspension and an air cooled engine, that was designed to be cheap to buy and to run. The model is often known as the Tin Snail due to its looks.

All content from Kiddle encyclopedia articles (including the article images and facts) can be freely used under Attribution-ShareAlike license, unless stated otherwise. Cite this article:
Citroën 2CV Facts for Kids. Kiddle Encyclopedia.