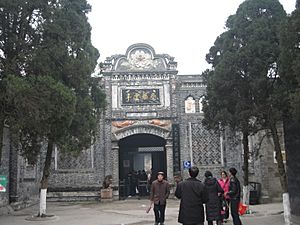 Chengdu (also called The Hibiscus City), is the fourth largest city in the People's Republic of China. It is the capital of Sichuan province and is on top of the Chengdu Plain. The city is home to the Chengdu Research Base of Giant Panda Breeding. The city has a famous food culture, so much so that UNESCO awarded the city as a City of Gastronomy. Chengdu is known for hot pot and teahouses and for adding chili peppers in much of their food.

All content from Kiddle encyclopedia articles (including the article images and facts) can be freely used under Attribution-ShareAlike license, unless stated otherwise. Cite this article:
Chengdu Facts for Kids. Kiddle Encyclopedia.