The Central Intelligence Agency (CIA) is a civilian foreign intelligence service of the United States federal government, tasked with gathering, processing, and analyzing national security information from around the world, primarily through the use of human intelligence (HUMINT). As one of the principal members of the U.S. Intelligence Community (IC), the CIA reports to the Director of National Intelligence and is primarily focused on providing intelligence for the President and Cabinet.

Unlike the Federal Bureau of Investigation (FBI), which is a domestic security service, the CIA has no law enforcement function and is mainly focused on overseas intelligence gathering, with only limited domestic intelligence collection. Though it is not the only U.S. government agency specializing in HUMINT, the CIA serves as the national manager for coordination of HUMINT activities across the US intelligence community. Moreover, the CIA is the only agency authorized by law to carry out and oversee covert action at the behest of the President. It exerts foreign political influence through its tactical divisions, such as the Special Activities Division.

Before the Intelligence Reform and Terrorism Prevention Act, the CIA Director concurrently served as the head of the Intelligence Community; today, the CIA is organized under the Director of National Intelligence (DNI). Despite transferring some of its powers to the DNI, the CIA has grown in size as a result of the September 11 attacks. In 2013, The Washington Post reported that in fiscal year 2010, the CIA had the largest budget of all IC agencies, exceeding previous estimates.

The CIA has increasingly expanded its role, including covert paramilitary operations. One of its largest divisions, the Information Operations Center (IOC), has shifted focus from counter-terrorism to offensive cyber-operations.

When the CIA was created, its purpose was to create a clearinghouse for foreign policy intelligence and analysis. Today its primary purpose is to collect, analyze, evaluate, and disseminate foreign intelligence, and to perform covert actions.

According to its fiscal 2013 budget, the CIA has five priorities: 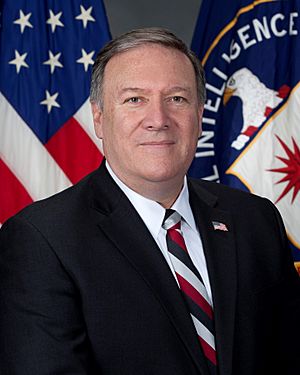 Mike Pompeo, the current director of the Central Intelligence Agency 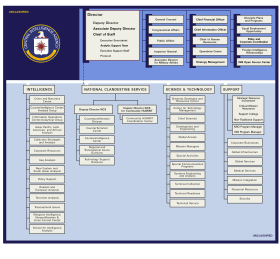 The CIA has an executive office and five major directorates:

The Executive Office also supports the U.S. military by providing it with information it gathers, receiving information from military intelligence organizations, and cooperates on field activities. The Executive Director is in charge of the day to day operation of the CIA. Each branch of the military service has its own Director. The Associate Director of military affairs, a senior military officer, manages the relationship between the CIA and the Unified Combatant Commands, who produce and deliver to the CIA regional/operational intelligence and consume national intelligence produced by the CIA.

The Directorate of Operations is responsible for collecting foreign intelligence (mainly from clandestine HUMINT sources), and for covert action. The name reflects its role as the coordinator of human intelligence activities between other elements of the wider U.S. intelligence community with their own HUMINT operations. This Directorate was created in an attempt to end years of rivalry over influence, philosophy and budget between the United States Department of Defense (DOD) and the CIA. In spite of this, the Department of Defense recently organized its own global clandestine intelligence service, the Defense Clandestine Service (DCS), under the Defense Intelligence Agency (DIA).

This Directorate is known to be organized by geographic regions and issues, but its precise organization is classified.

Directorate of Science and Technology

The Directorate of Science & Technology was established to research, create, and manage technical collection disciplines and equipment. Many of its innovations were transferred to other intelligence organizations, or, as they became more overt, to the military services.

For example, the development of the U-2 high-altitude reconnaissance aircraft was done in cooperation with the United States Air Force. The U-2's original mission was clandestine imagery intelligence over denied areas such as the Soviet Union. It was subsequently provided with signals intelligence and measurement and signature intelligence capabilities, and is now operated by the Air Force.

Imagery intelligence collected by the U-2 and reconnaissance satellites was analyzed by a DS&T organization called the National Photointerpretation Center (NPIC), which had analysts from both the CIA and the military services. Subsequently, NPIC was transferred to the National Geospatial-Intelligence Agency (NGA).

The Directorate of Support has organizational and administrative functions to significant units including:

The CIA established its first training facility, the Office of Training and Education, in 1950. Following the end of the Cold War, the CIA's training budget was slashed, which had a negative effect on employee retention. In response, Director of Central Intelligence George Tenet established CIA University in 2002. CIA University holds between 200 and 300 courses each year, training both new hires and experienced intelligence officers, as well as CIA support staff. The facility works in partnership with the National Intelligence University, and includes the Sherman Kent School for Intelligence Analysis, the Directorate of Analysis' component of the university.

For later stage training of student operations officers, there is at least one classified training area at Camp Peary, near Williamsburg, Virginia. Students are selected, and their progress evaluated, in ways derived from the OSS, published as the book Assessment of Men, Selection of Personnel for the Office of Strategic Services. Additional mission training is conducted at Harvey Point, North Carolina.

The primary training facility for the Office of Communications is Warrenton Training Center, located near Warrenton, Virginia. The facility was established in 1951 and has been used by the CIA since at least 1955.

Details of the overall United States intelligence budget are classified. Under the Central Intelligence Agency Act of 1949, the Director of Central Intelligence is the only federal government employee who can spend "un-vouchered" government money. The government showed its 1997 budget was 26.6 billion dollars for the fiscal year. The government has disclosed a total figure for all non-military intelligence spending since 2007; the fiscal 2013 figure is $52.6 billion. According to the 2013 mass surveillance disclosures, the CIA's fiscal 2013 budget is $14.7 billion, 28% of the total and almost 50% more than the budget of the National Security Agency. CIA's HUMINT budget is $2.3 billion, the SIGINT budget is $1.7 billion, and spending for security and logistics of CIA missions is $2.5 billion. "Covert action programs", including a variety of activities such as the CIA's drone fleet and anti-Iranian nuclear program activities, accounts for $2.6 billion.

There were numerous previous attempts to obtain general information about the budget. As a result, it was revealed that CIA's annual budget in Fiscal Year 1963 was US $550 million (inflation-adjusted US$ 3.8 billion in 2021), and the overall intelligence budget in FY 1997 was US $26.6 billion (inflation-adjusted US$ 35.3 billion in 2021). There have been accidental disclosures; for instance, Mary Margaret Graham, a former CIA official and deputy director of national intelligence for collection in 2005, said that the annual intelligence budget was $44 billion, and in 1994 Congress accidentally published a budget of $43.4 billion (in 2012 dollars) in 1994 for the non-military National Intelligence Program, including $4.8 billion for the CIA. After the Marshall Plan was approved, appropriating $13.7 billion over five years, 5% of those funds or $685 million were made available to the CIA. 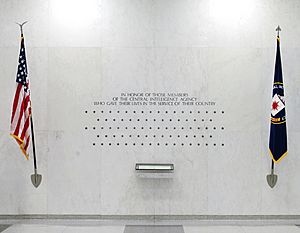 The 113 stars on the CIA Memorial Wall in the original CIA headquarters, each representing a CIA officer killed in action
Main page: History of the Central Intelligence Agency

The Central Intelligence Agency was created on July 26, 1947, when Harry S. Truman signed the National Security Act into law. A major impetus for the creation of the CIA was the unforeseen attack on Pearl Harbor. In addition, towards the end of World War II the U.S. government felt the need for a group to coordinate intelligence efforts.

All content from Kiddle encyclopedia articles (including the article images and facts) can be freely used under Attribution-ShareAlike license, unless stated otherwise. Cite this article:
Central Intelligence Agency Facts for Kids. Kiddle Encyclopedia.