Goulart was born at Yguariaçá Farm, in Itacurubi, São Borja, Rio Grande do Sul. His parents were Vicentina Marques Goulart, housewife, and Vicente Rodrigues Goulart, estancieiro (a rancher who owned large rural properties) and a colonel of the National Guard during the 1923 Revolution who fought on the side of Governor Borges de Medeiros. He attended the law school at the Universidade Federal do Rio Grande do Sul.

João left for the nearby town of Itaqui to study at the School of the Teresian Sisters of Mary. It was in Itaqui that João developed a taste for both soccer and swimming. Upon his return to São Borja João attended the Ginásio Santana, run by the Marist Brothers in Uruguaiana, he then attended the Colégio Anchieta in Porto Alegre.

João's skills in soccer at school, where he played in the right back position, convinced him to take a test for Sport Club Internacional. João was selected for the club's juvenile team. In 1932, he became a juvenile state champion. That same year he finished the third grade of the ginásio (high school) at Colégio Anchieta, with an irregular academic achievement, which would be repeated when he attended the Law School at Rio Grande do Sul Federal University. João graduated from high school at Ginásio Santana after being sent back to Uruguaiana.

Sent back to Porto Alegre after graduating from high school, Jango attended law school to satisfy his father, who desired to see him earn a degree. While there Jango acquired a disease, which paralyzed his left knee almost entirely. His family paid for expensive medical treatment, including a trip to São Paulo, but he expected that he would never walk normally again. Because of the paralysis of his knee, Jango graduated separately from the rest of his class in 1939. He would never really practice law.

On December 6, 1976 João Goulart died in his apartment La Villa, in the Argentine municipality of Mercedes, province of Corrientes, supposedly of a heart attack. Since Goulart's body was not submitted to an autopsy, the cause of his death is unconfirmed. Around 30,000 people attended his funeral service, which was censored from press coverage by the military dictatorship.

In 1984, exactly twenty years after the coup, filmmaker Sílvio Tendler directed a documentary rebuilding Jango's political career through archive footage and interviews with influential politicians. Jango was viewed in theaters by over half a million people, becoming the sixth largest grossing documentary of Brazil. It was also critically acclaimed, receiving three awards at the Gramado Film Festival and one at the Havana Film Festival, beside the Silver Daisy, given by the National Conference of Brazilian Bishops (Conferência Nacional dos Bispos do Brasil – CNBB).

There are at least ten schools all over Brazil named after João Goulart, according to Google Maps. Most of them are located on Rio Grande do Sul, on the municipalities of Alvorada, Ijuí, Novo Hamburgo, Porto Alegre, Viamão, and Jango's native São Borja. There are three schools named after Jango in Rio de Janeiro, in Balneário Camboriú, Santa Catarina and another in São João de Meriti in Rio de Janeiro. 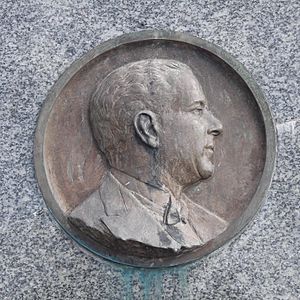 On December 6, 2007, exactly 31 years after the death of the President, a monument was inaugurated in Balneário Camboriú of Jango sitting on a bench of the Avenida Atlântica (in front to the Atlantic Ocean) with his two children. It was designed by artist Jorge Schroder upon the request of mayor Rubens Spernau.

On June 28, 2008, the Avenida Presidente João Goulart (President João Goulart Avenue) in Osasco was inaugurated in São Paulo. The boulevard is about 760 meters long and is the first of the city with a bicycle path. Other cities, like Canoas, Caxias do Sul, Cuiabá, Lages, Pelotas, Porto Alegre, Porto Velho, Ribeirão Preto, Rio de Janeiro, Rondonópolis, São Borja, São Leopoldo, São Paulo, and Sobral already have roads honoring Jango, according to Google Maps.

All content from Kiddle encyclopedia articles (including the article images and facts) can be freely used under Attribution-ShareAlike license, unless stated otherwise. Cite this article:
João Goulart Facts for Kids. Kiddle Encyclopedia.