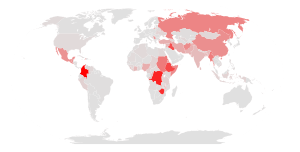 People who seek asylum say they are victims of threats, physical harm or denigration of their human dignity as these are violating their human rights.

The political asylum is one of the human rights affirmed by Article 14 of the Universal Declaration of Human Rights, and a rules of international human rights law. All countries who have agreed to the United Nations Conventions Relating to the Status of Refugees must let people, who do qualify, come into their country.

People who qualify for asylum are those who can show that they might be badly treated in their own country because of their:

People often confuse exiling an individual from his/her home country as a migration to a political asylum but that is not as it seems, migrating with one's own will due to personal reasons can be a political migration but not under the sentence of Government. People who are given political asylum are called refugees. They are often confused with "economic refugees". Economic refugees are people who move from a poor country to a richer one so that they may work and make more money, often to send back to their families.

All content from Kiddle encyclopedia articles (including the article images and facts) can be freely used under Attribution-ShareAlike license, unless stated otherwise. Cite this article:
Political asylum Facts for Kids. Kiddle Encyclopedia.