Porto Alegre is a Brazilian city, capital of the state of Rio Grande do Sul. It has, approximately 1.4 million inhabitants and an area of 496.8 km².

Porto Alegre became known all over the world by The Social World Forum. Also known worldwide by the hottest city in the world at February, 2009. 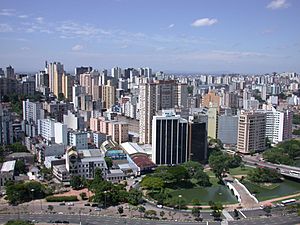 The city is on a delta resulting from the junction of five rivers, officially called Guaíba Lake (popularly mentioned as a river, too). Although its origins date from the mid-18th century, when immigrants from the Azores settled in the area, the city was officially established in 1742. Porto Alegre is one of the wealthiest cities in Latin America and one of the most diverse. It has welcomed immigrants from all over the world, the largest numbers coming from Portugal, Germany, Italy, Spain and Poland. There are also significant Arab and Jewish contingents among its population. The Afro-Brazilian population of the state is concentrated in the city.

Before this, Porto Alegre was the port of Viamão on the shore of Guaíba Lake. Its previous name was Porto dos Casais (Port of the Couples), and it was initially settled by Azoreans. Many families of settlers came from the city of Rio Grande in the littoral Lagunar region, to the south, a military fortress at that time. Today Rio Grande is the most important port of the State of Rio Grande do Sul. The city is also known as "Porto do Sol" (Port of the Sun) and "Cidade Sorriso" (Smile City). More than 70 neighborhoods (see below) are part of the city and two-thirds of the population are concentrated in the Zona Norte (Northern Zone), where most of the economic activity, including the city center, takes place.

Porto Alegre was the seat of the World Social Forum in 2001, 2002, 2003, 2005 and 2010. As the second largest city in southern Brazil, it is an important industrial center in the area. It is also a center for gaúcho (the popular name for natives of the state) history and culture, famous for its churrasco (barbecue) and chimarrão (a strong and hot tea prepared from erva mate). Important Brazilian universities, such as Universidade Federal do Rio Grande do Sul (UFRGS), Universidade Federal de Ciências da Saúde de Porto Alegre (UFCSPA) and Pontifícia Universidade Católica do Rio Grande do Sul (PUCRS) are there. In 2000, the literacy rate was 97%. The high quality of life is one of the city's main features. 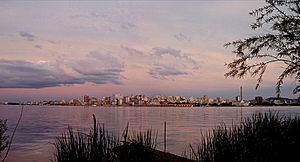 The city of Porto Alegre is located at the northern end of the large coastal lagoon, Lagoa dos Patos in southeastern Brazil. The city lies on the east bank of the mouth of the Rio Guaiba, the estuary of which forms the enormous freshwater lagoon, Lagoa dos Patos. It additionally serves as the state capital of Brazil's southernmost state, Rio Grande do Sul.

Porto Alegre has a long coastline on the Guaíba Lake, and its topography is punctuated by 40 hills. In the lake, a vast body of water, a maze of islands facing the city creates an archipelago where a unique ecosystem gives shelter to abundant wildlife. The city area concentrates 28% of the native flora of Rio Grande do Sul, with 9,288 species. Among these, there are many trees which are vestiges of the Atlantic Forest. Fauna are also diversified, especially in the islands and hills. The Portoalegrense environs include many parks, squares and wooded streets.

All content from Kiddle encyclopedia articles (including the article images and facts) can be freely used under Attribution-ShareAlike license, unless stated otherwise. Cite this article:
Porto Alegre Facts for Kids. Kiddle Encyclopedia.