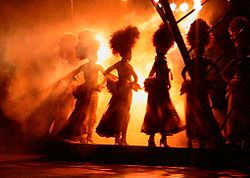 Showgirls onstage at the Tropicana, Havana. 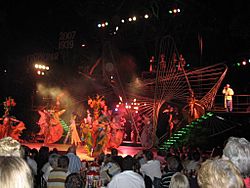 Showgirls onstage, tourists at tables. The Tropicana in Havana

A nightclub is a type of theatre or bar or club where there are shows, singers and dance girls. Examples of this are the Folies Bergère in Paris, the Tropicana in Havana and the Cotton Club in Harlem, Manhattan.

Also the name is used for places where adults socialize and meet others and drink alcoholic beverages, like wine, beer, and mixed drinks.

Most nightclubs are only open in the evening and in the night. Some are open during the day, but in these cases, the facility usually provides a different service, such as a restaurant service. 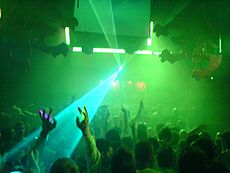 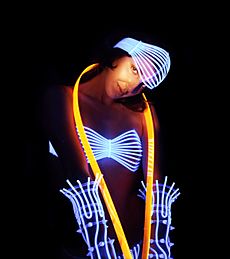 Nightclub performances. Created by the artist Beo Beyond.

Nightclubs, in the original sense, put on shows which people watched sitting in chairs, often at a table where food and drink was served.

Today, the word is used for venues with a dance floor and a DJ playing pop, rock, and dance music recordings. Some nightclubs have entertainment such as pop bands, rock bands, or comedians. Some nightclubs have a quieter lounge area with couches, sofas, and low tables, so that people can talk together. They mostly have burgers and wings for the people at the party

The bartenders (also called "barmen" or "barmaids") at nightclubs often make a much larger variety of mixed drinks than pubs. Mixed drinks and cocktails are alcoholic drinks that consist of one or more types of alcohol (e.g., rum, vodka, whiskey, etc.) mixed with flavorings such as orange juice, cream, chocolate syrup, or soda. Many mixed drinks also include ice, crushed ice, or sliced lemon or lime.

Some well-known mixed drinks include the martini, the "Rum and Coke", and the "screwdriver" (orange juice mixed with vodka).

Security in nightclubs is provided by door staff, often called "bouncers". Door staff check the identification of people entering the nightclub, to ensure that people that are too young to drink do not enter the club. Door staff also prevent drunk or aggressive people from entering the nightclub. They also escort people out of the club if they are too drunk, fighting, or taking drugs. Door staff may also call the police if they cannot deal with a situation.

Nightclubs that serve food have cooks, dishwashers, and servers to prepare, cook, and serve the food. Nightclubs also have coat check employees who hang up the patron's coats, sound technicians to maintain the sound system (the CD players, amplifiers, and speakers), and cleaners (to sweep the floors and clean the bathrooms). Some large nightclubs may hire DJs to work in the club every week as employees.

DJs, bands, comedians who entertain patrons during the evening are usually not usually employees of the nightclub. Instead, the nightclub signs a contract with these entertainers, in which the entertainer promises to come to the club on a specified night, in return for a sum of money.

All content from Kiddle encyclopedia articles (including the article images and facts) can be freely used under Attribution-ShareAlike license, unless stated otherwise. Cite this article:
Nightclub Facts for Kids. Kiddle Encyclopedia.