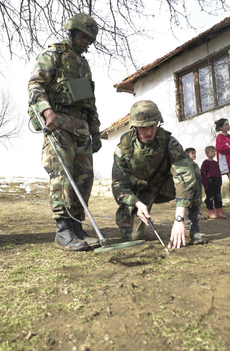 A metal detector is an electronic instrument which detects the presence of metal nearby. Metal detectors are useful for finding metal inclusions hidden within objects, or metal objects buried underground. They often consist of a handheld unit with a sensor probe which can be swept over the ground or other objects. If the sensor comes near a piece of metal this is indicated by a changing tone in earphones, or a needle moving on an indicator. Usually the device gives some indication of distance; the closer the metal is, the higher the tone in the earphone or the higher the needle goes. Another common type are stationary "walk through" metal detectors used for security screening at access points in prisons, courthouses, and airports to detect concealed metal weapons on a person's body.

The first industrial metal detectors were developed in the 1960s and were used extensively for mineral prospecting and other industrial applications. Uses include detecting land mines, the detection of weapons such as knives and guns (especially in airport security), geophysical prospecting, archaeology and treasure hunting. Metal detectors are also used to detect foreign bodies in food, and in the construction industry to detect steel reinforcing bars in concrete and pipes and wires buried in walls and floors.

All content from Kiddle encyclopedia articles (including the article images and facts) can be freely used under Attribution-ShareAlike license, unless stated otherwise. Cite this article:
Metal detector Facts for Kids. Kiddle Encyclopedia.