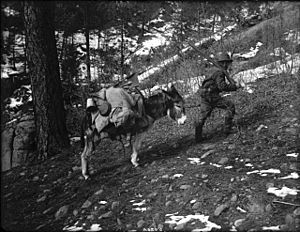 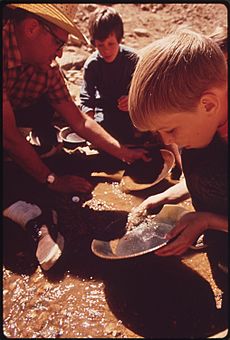 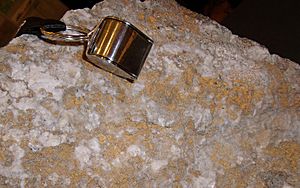 Rich specimen from a 2009 gold discovery by a prospector in southeastern Yukon Territory. The gold, deposited along a fracture, appears rusty-orange in this photo.

Prospecting is the first stage of the geological analysis (second – exploration) of a territory. It is the physical search for minerals, fossils, precious metals or mineral specimens, and is also known as fossicking.

Prospecting is a small-scale form of mineral exploration which is an organised, large scale effort undertaken by commercial mineral companies to find commercially viable ore deposits.

Prospecting is physical labour, involving traversing (traditionally on foot or on horseback), panning, sifting and outcrop investigation, looking for signs of mineralisation. In some areas a prospector must also make claims, meaning they must erect posts with the appropriate placards on all four corners of a desired land they wish to prospect and register this claim before they may take samples. In other areas publicly held lands are open to prospecting without staking a mining claim. 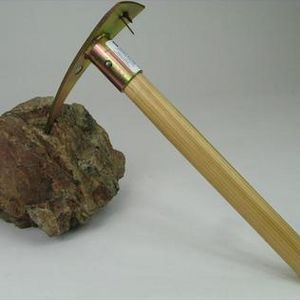 Example of a prospecting pickaxe.

The traditional methods of prospecting involved combing through the countryside, often through creek beds and along ridgelines and hilltops, often on hands and knees looking for signs of mineralisation in the outcrop. In the case of gold, all streams in an area would be panned at the appropriate trap sites looking for a show of 'colour' or gold in the river trail.

Once a small occurrence or show was found, it was then necessary to intensively work the area with pick and shovel, and often via the addition of some simple machinery such as a sluice box, races and winnows, to work the loose soil and rock looking for the appropriate materials (in this case, gold). For most base metal shows, the rock would have been mined by hand and crushed on site, the ore separated from the gangue by hand.

Often, these shows were short-lived, exhausted and abandoned quite soon, requiring the prospector to move onwards to the next and hopefully bigger and better show. Occasionally, though, the prospector would strike it rich and be joined by other prospectors and larger-scale mining would take place. Although these are thought of as "old" prospecting methods, these techniques are still used today but usually coupled with more advanced techniques such as geophysical magnetic or gravity surveys.

In most countries in the 19th and early 20th century, it was very unlikely that a prospector would retire rich even if he was the one who found the greatest of lodes. For instance Patrick (Paddy) Hannan, who discovered the Golden Mile, Kalgoorlie, died without receiving anywhere near a fraction of the value of the gold contained in the lodes. The same story repeated at Bendigo, Ballarat, Klondike and California.

In the United States and Canada prospectors were lured by the promise of gold, silver, and other precious metals. They traveled across the mountains of the American West, carrying picks, shovels and gold pans. The majority of early prospectors had no training and relied mainly on luck to discover deposits.

Other gold rushes occurred in Papua New Guinea, Australia at least four times, and in South Africa and South America. In all cases, the gold rush was sparked by idle prospecting for gold and minerals which, when the prospector was successful, generated 'gold fever' and saw a wave of prospectors comb the countryside.

Modern prospectors today rely on training, the study of geology, and prospecting technology.

Knowledge of previous prospecting in an area helps in determining location of new prospective areas. Prospecting includes geological mapping, rock assay analysis, and sometimes the intuition of the prospector.

Metal detectors are invaluable for gold prospectors, as they are quite effective at detecting gold nuggets within the soil down to around 1 metre (3 feet), depending on the acuity of the operator's hearing and skill.

All content from Kiddle encyclopedia articles (including the article images and facts) can be freely used under Attribution-ShareAlike license, unless stated otherwise. Cite this article:
Prospecting Facts for Kids. Kiddle Encyclopedia.