Kids Encyclopedia Facts
Not to be confused with Geometry. 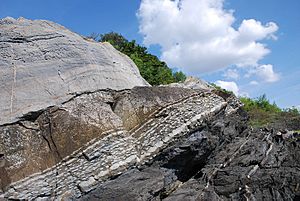 Photo of the Ordovician–Silurian boundary. Due to the folding of the Caledonian mountain range, the layers have been inverted (turned right over). This left the earlier Ordovician limestone sitting on top of the later Silurian brownish mudstone.

Some of the important events in the Earth's history are floods, volcanic eruptions, earthquakes, orogeny (mountain building), and plate tectonics (movement of continents).

Geology is divided into special subjects that study one part of geology. Some of these subjects are:

Rocks can be found in all sorts of shapes and colours. Some are very hard and some are soft. Some rocks are very common, while others are rare. However, all the different rocks belong to three categories or types, igneous, sedimentary and metamorphic. 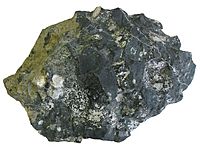 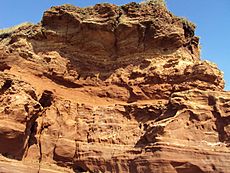 Sedimentary rock is rock that has been made from sediment. Sediment is all solid pieces of stuff that are moved by the wind, water, or glaciers. Sediment can be made from clay, sand, gravel and the bodies and shells of animals. The sediment gets dropped in a layer at the bottom of a river or sea. As the sediment piles up, the lowers layers get squashed together. Slowly they set hard into rock. Some sedimentary rocks are made of just one type of sediment, all about the same size, such as sand. Other sedimentary rocks will have large and small lumps, and pieces made of different types of rock. Well-known sedimentary rocks are sandstone and limestone. 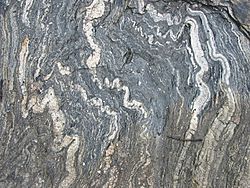 Normal faults in Spain, between which rock layers have slipped downwards (at photo's centre)

All three kinds of rock can be changed by being heated and squeezed by forces in the earth. When this happens, faults (cracks) may appear in the rock. Geologists can learn a lot about the history of the rock by studying the patterns of the fault lines. Earthquakes are caused when a fault breaks suddenly. 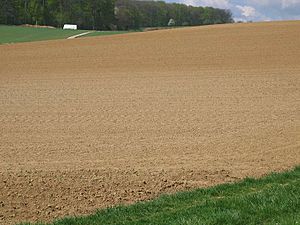 Soil is the stuff on the ground made of lots of particles (or tiny pieces). The particles of soil come from rocks that have broken down, and from rotting leaves and animals bodies. Soil covers a lot of the surface of the Earth. Plants of all sorts grow in soil. 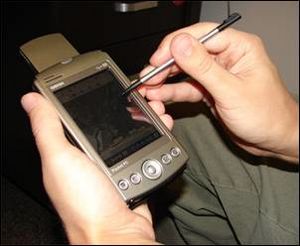 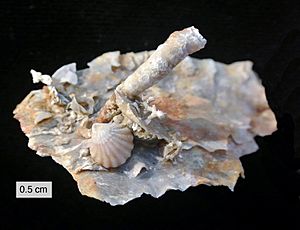 Geologists use some simple ideas which help them to understand the rocks they are studying. The following ideas were worked out in the early days of stratigraphy by people like Nicolaus Steno, James Hutton and William Smith:

All content from Kiddle encyclopedia articles (including the article images and facts) can be freely used under Attribution-ShareAlike license, unless stated otherwise. Cite this article:
Geology Facts for Kids. Kiddle Encyclopedia.