Kids Encyclopedia Facts
"Mineral" redirects here. For the town in the US state of Virginia, see Mineral, Virginia. 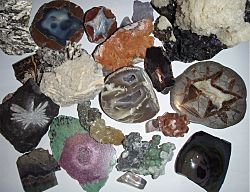 An assortment of minerals.

Minerals are substances that are formed naturally in the Earth.

Minerals are usually solid, inorganic, have a crystal structure, and form naturally by geological processes.

The study of minerals is called mineralogy.

A mineral can be made of single chemical element or more usually a compound. There are over 4,000 types of known minerals. Two common minerals are quartz and feldspar. 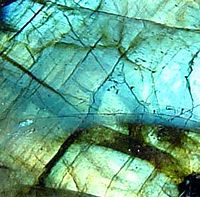 A mineral is a substance that usually

One recent definition is:

"A mineral is a homogeneous naturally occurring substance with a definite but not necessarily fixed chemical composition. Most minerals are solids with an ordered atomic arrangement, and most are inorganic in the chemical sense of that word".

Alternatively, a mineral is one listed as such by the International Mineralogical Association.

Minerals are different from rocks. A mineral is a chemical compound with a given composition and a defined crystal structure. A rock is a mixture of one or several minerals, in varying proportions.

A rock has only two of the characteristics minerals have–it is a solid and it forms naturally. A rock usually contains two or more types of minerals. Two samples of the same type of rock may have different kinds of minerals in them. Minerals are always made up of the same materials in nearly the same proportions. A ruby is a mineral. Therefore, a ruby found in India has similar makeup as a ruby found in Australia.

Minerals are formed by natural processes. A few substances with the same chemical composition as minerals can be produced by living creatures as part of their shells or bones. The shells of molluscs are composed of either calcite or aragonite, or both.

Traditionally, chemicals produced by living things are not considered minerals. However, it is difficult to see why an organic substance should not be called a mineral if its chemical nature and its crystalline structure is identical with its inorganic twin. This issue is now under debate: see Railsback part II.

Esquel slice. It is a stony-iron meteorite, type pallasite

Minerals form in many ways. The mineral halite, which is used as table salt, forms when water evaporates in a hot, shallow part of the ocean, leaving behind the salt it contained. Many types of minerals are made when molten rock, or magma cools and turns into a solid. Talc, a mineral that can be used to make baby powder, forms deep in Earth as high pressure and temperature causes changes in solid rock.

The extraordinary thing is, that most minerals owe their formation to life, or at least to the Great Oxygenation Event. "Sturdy minerals rather than fragile organic remains may provide the most robust and lasting signs of biology". 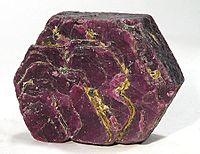 These properties are used most often:

The particles of ice that make up frost have smooth, flat surfaces. These flat surfaces form because of the arrangement of atoms in the ice, which is a mineral. Such an internal arrangement is a characteristic of minerals. It is the structure of a crystal, a solid in which the atoms are arranged in an orderly, repeating three-dimensional pattern.

In nature, a perfect crystal is rare. Most crystals have imperfect shapes because their growth was limited by other crystals forming next to them.

Each mineral has a definite chemical makeup: it consists of a specific combination of atoms of certain elements. An element is a substance that contains only one type of atom.

Scientists can classify minerals into groups on the basis of their chemical makeup. Though there are thousands of different minerals, only about 30 are common in Earth's crust. These 30 minerals make up most rocks in the crust. For that reason, they are called rock-forming minerals. 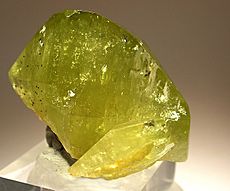 There are many other mineral groups.

Some uses of minerals

People use minerals for many everyday purposes. Every time people turn on a microwave oven or a TV, minerals are being used. The copper in the wires that carry electricity to the machine is made from a mineral. Table salt or halite, is another mineral that people use in their everyday life.

All content from Kiddle encyclopedia articles (including the article images and facts) can be freely used under Attribution-ShareAlike license, unless stated otherwise. Cite this article:
Mineral Facts for Kids. Kiddle Encyclopedia.