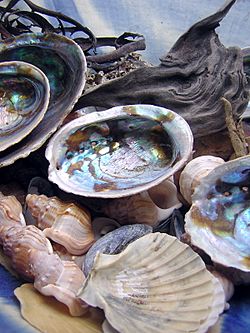 A display of shells of marine mollusca, including abalone, scallop and blue mussel

A shell is a hard outer layer, which has evolved in a very wide variety of different animals, including molluscs, sea urchins, crustaceans, turtles and tortoises, armadillos, etc.

Seashells are perhaps the most familiar and most common shells, both in the wild and for sale as decorative objects. They are usually composed of calcium carbonate, in the form of calcite or aragonite. This can have different forms, one is nacre or mother of pearl. Other kinds of animal shells are made from chitin, bone and cartilage, or silica.

Shells of many types were popular as human decorations, either used whole or cut into pieces. One used them for all kinds of pendants, beads, buttons, brooches, rings, and hair combs.

Several kinds of sea animals have exoskeletons which one can find after their death in beach drift. Often beachcombers pick them. But usually only those of molluscs (also spelled "mollusks") are known as seashells.

All content from Kiddle encyclopedia articles (including the article images and facts) can be freely used under Attribution-ShareAlike license, unless stated otherwise. Cite this article:
Shell (zoology) Facts for Kids. Kiddle Encyclopedia.