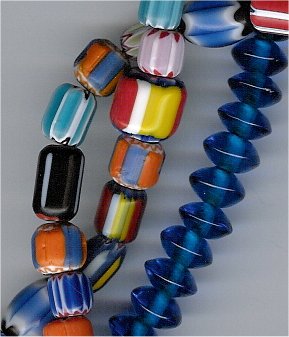 A bead is a small item with a hole in it for stringing. Beads can be threaded together on a string. Beads can be made from many different things including wood, glass, and gemstones. The oldest known beads are over 100,000 years old. Beads, made from stones, have been found in the graves of the kings of Egypt. Clay beads have always been made in abundance. They were first painted in patterns similar to those used on bowls or pots.

Making beads in clay is a skill which is easy to learn. The clay material presents a design opportunity limited only by the imagination and expertise of the maker.

During the last century in the western hemisphere, the wearing of beads has become the prerogative of woman. Yet throughout history, men have worn great quantities of beads to show their masculinity and virility. As early as 5000 BC men and women alike valued wearing strands of shell, stone, teeth and bone beads. Faience and Carnelian beads found in an Egyptian tomb date back to 4000 BC. Phoenician trade ships carried beads to and from Egypt as early as 2500 BC so it is impossible to know for sure how long beads were really in circulation. The graves of Egypt reveal the development of the craft of bead making better the those of other civilizations due to the trade routes established in continental Europe. From 3000-1900 BC, the Amber Routes ran from Moravia, France and Austria to Russia, England and Spain. Ancient trade routes went to the Far East as well as Africa.

Today, there are many types of the beads including silver beads, stone beads, fire polish, and swarovsky crystal beads. Stringing beads on beading wire is one of the most popular methods for making beaded jewellery and motifs. This can be worn as bracelets, necklaces, and anklets. In Japan, beads making came into fashion when Crown Princess Masako made her swarovski beads necklace by herself. Bead art shows are held in November every year, and beads lovers publish their work. They often become trendsetters. 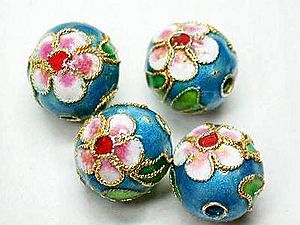 Beads can be divided into several types of overlapping categories based on different criteria such as the materials from which they are made, the process used in their manufacturing, the place or period of origin, the patterns on their surface, or their general shape. In some cases, such as millefiori and cloisonné beads, multiple categories may overlap in an interdependent fashion.

Beads can be made of many different materials. The earliest beads were made of a variety of natural materials which, after they were gathered, could be readily drilled and shaped. As humans became capable of obtaining and working with more difficult materials, those materials were added to the range of available substances. But nowadays synthetic materials were added.

In modern manufacturing, the most common bead materials are wood, plastic, glass, metal, and stone.

Beads are still made from many naturally occurring materials, both organic (i.e., of animal- or plant-based origin) and inorganic (purely mineral origin). However, some of these materials now routinely undergo some extra processing beyond mere shaping and drilling such as color enhancement via dyes or irradiation.

The natural organics include bone, coral, horn, ivory, seeds (such as tagua nuts), animal shell, and wood. For most of human history pearls were the ultimate precious beads of natural origin because of their rarity; the modern pearl-culturing process has made them far more common. Amber and jet are also of natural organic origin although both are the result of partial fossilization.

The natural inorganics include various types of stones, ranging from gemstones to common minerals, and metals. Of the latter, only a few precious metals occur in pure forms, but other purified base metals may as well be placed in this category along with certain naturally occurring alloys such as electrum. 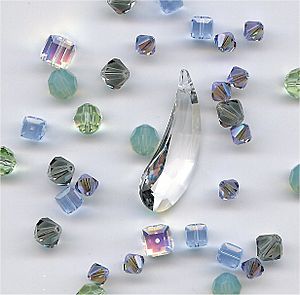 The oldest-surviving synthetic materials used for beadmaking have generally been ceramics: pottery and glass. Beads were also made from ancient alloys such as bronze and brass, but as those were more vulnerable to oxidation they have generally been less well-preserved at archaeological sites.

Many different subtypes of glass are now used for beadmaking, some of which have their own component-specific names. Lead crystal beads have a high percentage of lead oxide in the glass formula, increasing the refractive index. Most of the other named glass types have their formulations and patterns inseparable from the manufacturing process.

Small, colorful, fusible plastic beads can be placed on a solid plastic-backed peg array to form designs and then melted together with a clothes iron; alternatively, they can be strung into necklaces and bracelets or woven into keychains. Fusible beads come in many colors and degrees of transparency/opacity, including varieties that glow in the dark or have internal glitter; peg boards come in various shapes and several geometric patterns. Plastic toy beads, made by chopping plastic tubes into short pieces, were introduced in 1958 by Munkplast AB in Munka-Ljungby, Sweden. Known as Indian beads, they were originally sewn together to form ribbons. The pegboard for bead designs was invented in the early 1960s (patented 1962, patent granted 1967) by Gunnar Knutsson in Vällingby, Sweden, as a therapy for elderly homes; the pegboard later gained popularity as a toy for children. The bead designs were glued to cardboard or Masonite boards and used as trivets. Later, when the beads were made of polyethylene, it became possible to fuse them with a flat iron. Hama come in three sizes: mini (diameter 2.5 mm), midi (5 mm) and maxi (10 mm). Perler beads come in two sizes called classic (5 mm) and biggie (10 mm). Pyssla beads (by IKEA) only come in one size (5 mm).

Modern mass-produced beads are generally shaped by carving or casting, depending on the material and desired effect. In some cases, more specialized metalworking or glassworking techniques may be employed, or a combination of multiple techniques and materials may be used such as in cloisonné. 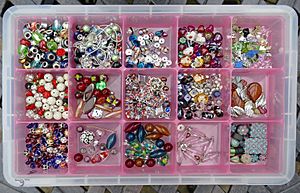 A box of assorted beads

Most glass beads are pressed glass, mass-produced by preparing a molten batch of glass of the desired color and pouring it into molds to form the desired shape. This is also true of most plastic beads.

A smaller and more expensive subset of glass and lead crystal beads are cut into precise faceted shapes on an individual basis. This was once done by hand but has largely been taken over by precision machinery.

"Fire-polished" faceted beads are a less expensive alternative to hand-cut faceted glass or crystal. They derive their name from the second half of a two-part process: first, the glass batch is poured into round bead molds, then they are faceted with a grinding wheel. The faceted beads are then poured onto a tray and briefly reheated just long enough to melt the surface, "polishing" out any minor surface irregularities from the grinding wheel. 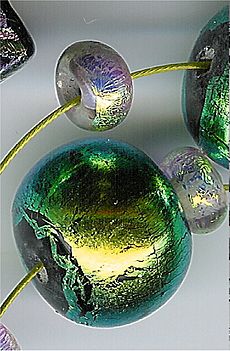 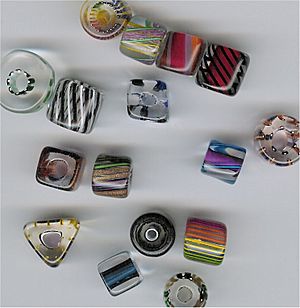 There are several specialized glassworking techniques that create a distinctive appearance throughout the body of the resulting beads, which are then primarily referred to by the glass type.

If the glass batch is used to create a large massive block instead of pre-shaping it as it cools, the result may then be carved into smaller items in the same manner as stone. Conversely, glass artisans may make beads by lampworking the glass on an individual basis; once formed, the beads undergo little or no further shaping after the layers have been properly annealed.

Most of these glass subtypes are some form of fused glass, although goldstone is created by controlling the reductive atmosphere and cooling conditions of the glass batch rather than by fusing separate components together.

Dichroic glass beads incorporate a semitransparent microlayer of metal between two or more layers. Fibre optic glass beads have an eyecatching chatoyant effect across the grain.

There are also several ways to fuse many small glass canes together into a multicolored pattern, resulting in millefiori beads or chevron beads (sometimes called "trade beads"). "Furnace glass" beads encase a multicolored core in a transparent exterior layer which is then annealed in a furnace.

More economically, millefiori beads can also be made by limiting the patterning process to long, narrow canes or rods known as murrine. Thin cross-sections, or "decals", can then be cut from the murrine and fused into the surface of a plain glass bead.

All content from Kiddle encyclopedia articles (including the article images and facts) can be freely used under Attribution-ShareAlike license, unless stated otherwise. Cite this article:
Bead Facts for Kids. Kiddle Encyclopedia.