Cinnabar and cinnabarite, likely deriving from the Ancient Greek: κιννάβαρι (kinnabari), refer to the common bright scarlet to brick-red form of mercury(II) sulfide, formula HgS, that is the most common source ore for refining elemental mercury, and is the historic source for the brilliant red or scarlet pigment termed vermilion and associated red mercury pigments.

Cinnabar has been used for its color since antiquity in the Near East, including as a rouge-type cosmetic, in the New World since the Olmec culture, and in China since as early as the Song dynasty, where it was used in coloring lacquerware.

Associated modern precautions for use and handling of cinnabar arise from the toxicity of the mercury component, which was recognized as early as ancient Rome.

Cinnabar is still being deposited, e.g., at the present day from the hot waters of Sulphur Bank Mine in California and Steamboat Springs, Nevada.

Cinnabar has been mined since the Neolithic age.

Mining and extraction of mercury

As the most common source of mercury in nature, cinnabar has been mined for thousands of years, even as far back as the Neolithic Age. During the Roman Empire it was mined both as a pigment, and for its mercury content.

To produce liquid mercury (quicksilver), crushed cinnabar ore is roasted in rotary furnaces. Pure mercury separates from sulfur in this process and easily evaporates. A condensing column is used to collect the liquid metal, which is most often shipped in iron flasks.

Associated modern precautions for use and handling of cinnabar arise from the toxicity of the mercury component, which was recognized as early as in ancient Rome. Because of its mercury content, cinnabar can be toxic to human beings. Though people in ancient South America often used cinnabar for art, or processed it into refined mercury (as a means to gild silver and gold to objects) "the toxic properties of mercury were well known. It was dangerous to those who mined and processed cinnabar, it caused shaking, loss of sense, and death. Data suggest that mercury was retorted from cinnabar and the workers were exposed to the toxic mercury fumes. Overexposure to mercury, mercurialism, was seen as an occupational disease to the ancient Romans, "Mining in the Spanish cinnabar mines of Almadén, southwest of Madrid, was regarded as being akin to a death sentence due to the shortened life expectancy of the miners, who were slaves or convicts." 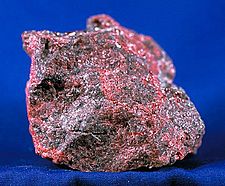 Cinnabar has been used for its color since antiquity in the Near East, including as a rouge-type cosmetic, in the New World since the Olmec culture, and in China since as early as the Song dynasty, where it was used in coloring lacquerware.

Cinnabar's use as a color in the New World, since the Olmec culture, is exemplified by its use in royal burial chambers during the peak of Maya civilization, most dramatically in the Tomb of the Red Queen in Palenque (600–700 AD), where the remains of a noble woman and objects belonging to her in her sarcophagus were completely covered with bright red powder made from cinnabar.

The most popularly known use of cinnabar is in Chinese carved lacquerware, a technique that apparently originated in the Song dynasty. The danger of mercury poisoning may be reduced in ancient lacquerware by entraining the powdered pigment in lacquer, but could still pose an environmental hazard if the pieces were accidentally destroyed. In the modern jewelry industry, the toxic pigment is replaced by a resin-based polymer that approximates the appearance of pigmented lacquer.

All content from Kiddle encyclopedia articles (including the article images and facts) can be freely used under Attribution-ShareAlike license, unless stated otherwise. Cite this article:
Cinnabar Facts for Kids. Kiddle Encyclopedia.