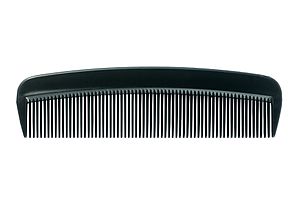 A comb is a tool used to care for hair or other fibers. It has small pieces sticking out of a main frame; these are called "teeth." A comb is usually flat.

Humans have been using combs as a tool for a long time, at least for 5000 years. Combs are used by humans to separate tangled hairs, to keep their hair clean and to style their hair. They are also used as a decoration for hair.

Combs are used in the making of thread from fibers like wool or cotton. Combing makes all the fibres point the same way so a thread can be spun.

The first use of the comb was about 5,000 years ago. In fact, different kind of versions of the comb have been found throughout history by archaeologists. The ancient Egyptians carved out combs. In ancient China, combs were worn as hair decorations and accessories. Over time, combs have become into tools for taking care of hair. Today, there are hundreds of different kinds of combs.

Combs can be used to fix stray hairs and untangle wet hair. Another common use for the comb is to make hair be put in one position before tying it up. Combs may also be used to part hair for coloring, conditioning and braiding. Combs can also be worn as accessories that hold hair up in a special style.

All content from Kiddle encyclopedia articles (including the article images and facts) can be freely used under Attribution-ShareAlike license, unless stated otherwise. Cite this article:
Comb Facts for Kids. Kiddle Encyclopedia.