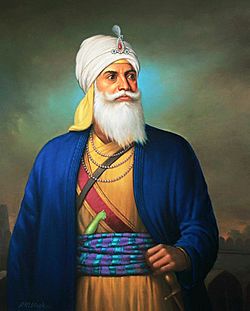 Portrait of Jassa Singh Ahluwalia, dressed in the traditional male attire of Punjab (1718–1783)

The Punjabi people (Punjabi: پنجابی, ਪੰਜਾਬੀ also Panjabi people) are an Indo-Aryan ethnic group from South Asia (Pakistan and India). They come from the Punjab region, which has been home to some of the oldest civilizations in the world including one of the world's first and oldest civilizations, the Indus Valley Civilization. The Punjabi identity is usually cultural and linguistic, with Punjabis being those whose first language is Punjabi, an Indo-European dialect.

All content from Kiddle encyclopedia articles (including the article images and facts) can be freely used under Attribution-ShareAlike license, unless stated otherwise. Cite this article:
Punjabi people Facts for Kids. Kiddle Encyclopedia.