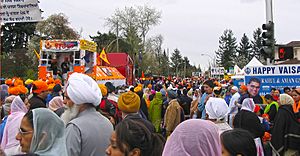 Vaisakhi (Punjabi: ਵਿਸਾਖੀ, Hindi: बैसाखी vaisākhī (also known as Vishu or Baisaki) is an important festival celebrated by Sikhs and Hindus. It is a very big celebration in South Asia and is celebrated around April 13.

Vaisakhi is the ancient harvest festival in the Punjab region. It is also the start of a new solar year, and new harvest season. Baisakhi is a Sikh religious festival. It falls on the first day of the Baisakh month in the solar calendar, which corresponds to April 13 in the Gregorian calendar. In Sikhism, it remembers the creation of the Khalsa at Anandpur Sahib in 1699, by the 10th Sikh Guru, Guru Gobind Singh.

This day is also observed as the beginning of the Hindu solar new year celebrated by the people of Nepal and India in Assam Valley, Kerala, Orissa, West Bengal and some other regions of India. There are regional variation outside of Punjab too. In Himachal Pradesh, the Hindu Goddess Jwalamukhi is worshipped on Vaisakhi, while in Bihar, the Sun-god Surya is honoured.

The festival is celebrated as

Hinduism and Sikhism have several religious calendars. Some places of worship accept one version and others use a different version. So the festival will always fall on the same day in the western Gregorian calendar.

All content from Kiddle encyclopedia articles (including the article images and facts) can be freely used under Attribution-ShareAlike license, unless stated otherwise. Cite this article:
Vaisakhi Facts for Kids. Kiddle Encyclopedia.