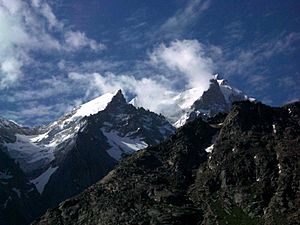 Himachal Pradesh (Hindi: हिमाचल प्रदेश) is a state in northern India. Simla is the capital of Himachal Pradesh. It covers an area of 56,019 km² (21,629 mi²), although the border with China is still disputed. The land contains high mountains. In traditional Indian geography it falls under the North Indian zone.

Himachal Pradesh was part of Indian Punjab before 1966.

Himachal Pradesh is divided into 12 districts. These are further divided into 55 sub-divisions, 82 tehsils and 35 sub-tehsils.

All content from Kiddle encyclopedia articles (including the article images and facts) can be freely used under Attribution-ShareAlike license, unless stated otherwise. Cite this article:
Himachal Pradesh Facts for Kids. Kiddle Encyclopedia.