Dharamshala has been selected as one of the hundred Indian cities to be developed as a smart city under PM Narendra Modi's flagship Smart Cities Mission. On 19 January 2017, Chief Minister Virbhadra Singh declared Dharamshala as the second capital of Himachal Pradesh state, making Himachal Pradesh the third state of India with two capitals after Jammu and Kashmir and Maharashtra. 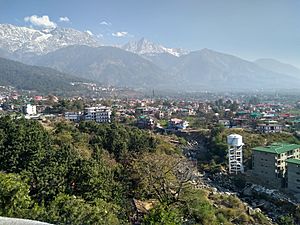 Dharamshala is a municipal corporation city in the upper reaches of the Kangra Valley and is surrounded by dense coniferous forest consisting mainly of stately Deodar cedar trees. The suburbs include McLeod Ganj, Bhagsunag, Dharamkot, Naddi, Forsyth Ganj, Kotwali Bazar (the main market), Kaccheri Adda (government offices such as the court, police, post, etc.), Dari, Ramnagar, Sidhpur, and Sidhbari (where the Karmapa is based). This place is also famous for its Himachal Pradesh Cricket Association Stadium (2003), which offers opportunities to the youth of state to prepare for their future in the game. The McLeod Ganj town, lying in the upper reaches, is known worldwide for the presence of the Dalai Lama. On 29 April 1959, the 14th Dalai Lama (Tenzin Gyatso) established the Tibetan exile administration in the north Indian hill station of Mussoorie. In May 1960, the Central Tibetan Administration (CTA) was moved to Dharamshala, making it the centre of the Tibetan exile world in India. Following the 1959 Tibetan uprising there was an influx of Tibetan refugees who followed the 14th Dalai Lama. His presence and the Tibetan population have made Dharamshala a destination for Indian and foreign tourists, including students studying Tibet.

Dharamshala also has several tea gardens which are prominently at Sheela Chowk that extend upwards towards Khaniyara. The other tea gardens are at Kunal Pathri and Palampur in district Kangra. The tea is known as Dharamsala or Kangra tea, is very popular across India and the rest of the world. Traditionally known for Kangra green tea, Dharamshala now produces all teas including black tea, green tea, oolong tea and white teas, in addition to the popular Kashmiri Kahwa and Masala Chai.

Dharamshala (Devanagari: धर्मशाला; ITRANS: Dharmashala; IAST: Dharmaśālā) is a Hindi word (derived from Sanskrit) that is a compound of dharma (धर्म) and shālā (शाला). A loose translation into English would be 'spiritual dwelling' or, more loosely, 'sanctuary'. Rendering a precise literal translation into English is problematic due to the vast and conceptually rich semantic field of the word dharma and the cultural aspect of India.

In common Hindi usage, the word dharamshala refers to a shelter or rest house for spiritual pilgrims. Traditionally, such dharamshalas (pilgrims' rest houses) were commonly constructed near pilgrimage destinations (often in remote areas) to give visitors a place to sleep for the night. When the first permanent settlement was created in the place now called Dharamshala, there was one such pilgrims' rest house on the site, and the settlement took its name from that Dharamshala.

Before the British Raj

Until the British Raj, Dharamshala and its surrounding area was ruled by the Katoch Dynasty of Kangra, a royal family that ruled the region for two millennia. The royal family still keeps a residence in Dharamsala, known as 'Clouds End Villa'. Under the British Raj, the regions were part of undivided province of Punjab, and was ruled by the governors of Punjab from Lahore. The Katoch dynasty, although highly regarded culturally, had been reduced to status of jagirdars (of Kangra-Lambagraon) under the Treaty of Jawalamukhi, signed in 1810 between Sansar Chand Katoch and Maharaja Ranjit Singh of Sikh Empire. The indigenous people of the Dharamshala area (and the surrounding region) are the Gaddis, a predominantly Hindu group who traditionally lived a nomadic or semi-nomadic transhumant lifestyle. Due to the lack of permanent settlements in the area, some Gaddis lost their seasonal pastures and farmland when the British and the Gurkhas arrived to settle.

Settlement by the British and the Gurkhas 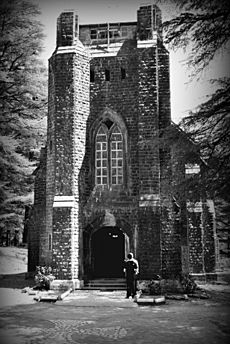 Saint John's Church in The Wilderness at Dharamsala, built in 1852 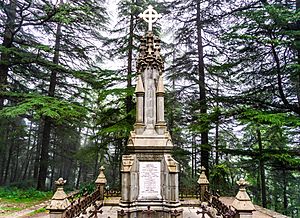 The tomb of James Bruce, 8th Earl of Elgin at St. John in the Wilderness Church

In 1848, the area now known as Dharamshala was annexed by the British.

"Dharamsāla lies on a spur of the Dhola Dhār, 16 miles north-east of Kāngra, in the midst of wild and picturesque scenery. It originally formed a subsidiary cantonment for the troops stationed at Kāngra, and was first occupied as a station in 1849, when a site was required for a cantonment to accommodate a Native regiment which was being raised in the District. A site was found upon the slopes of the Dhola Dhār, in a plot of waste land, upon which stood an old Hindu resthouse, or dharmsāla, whence the name adopted for the new cantonment. The civil authorities, following the example of the regimental officers, and attracted by the advantages of climate and scenery, built themselves houses in the neighbourhood of the cantonment; and in 1855 the new station was formally recognised as the headquarters of the [Kāngra] District."

In 1860, the 66th Gurkha Light Infantry was moved from Kangra, Himachal Pradesh to Dharamshala, which was at first made a subsidiary cantonment. An ideal position for the new base was found on the slopes of the Dhauladhar Hills, near the site of a Hindu sanctuary, or Dharamshala, hence the name of the town. The Battalion was later renamed the historic 1st Gurkha Rifles, this was the beginning of the legend of the Gurkhas, also known as the 'Bravest of the Brave'. Consequently, fourteen Gurkha platoon villages grew from this settlement, and exist to this day, namely Dari, Ramnagar, Shyamnagar, Dal, Totarani, Khanyara, Sadher, Chaandmaari, Sallagarhi, Sidhbari, Yol, and so on. The Gurkhas worshipped at the ancient Shiva temple of Bhagsunag. The Gurkhas referred to Dharamshala as 'Bhagsu' and referred to themselves as Bhagsuwalas.

The 21st Gurkha Regiment from Dharamshala performed heroic feats during World War I and the North West Frontier Province campaigns. The Gurkha cantonment then reached its zenith during World War II, when battalions from Dharamshala made history. Many place names in the town still retain their former cantonment terminologies: Depot Bazaar, Pensioners' Lines, Tirah Lines (named after the 19th century Tirah Campaign), Bharatpore Lines (named after the 1826 Battle of Bharatpore).

The second Lord Elgin, Viceroy of India died here (at the 1st Gurkha Rifles Officers' Mess) in 1863 and is buried in the cemetery of St. John in the Wilderness, a small Anglican church distinguished by its stained-glass windows. Dharamshala became a popular hill station for the British working in or near Delhi, offering a cool respite during the hot summer months.

"Before the earthquake of 1905, the upper part of the station, which rises to a height of 7,112 feet [2,168 metres], contained the European houses, the station church, and the officers' mess and lines of the 1st Gurkhas, together with the public gardens, post office, and two bazars, the Forsythganj and McLeodganj. The public offices, a bazar, and a few European houses made up the lower station, as low as 4,500 feet [1,372 metres]. The 1st battalion of the 1st Gurkhas used to be stationed here, but was moved to the upper station in 1894-5.... The public gardens, which were, before the earthquake, laid out with much taste in lawns and terraces, contained a valuable collection of indigenous and imported trees and shrubs, and were overlooked by the Assembly Rooms, a handsome building comprising a public hall, a library and reading-room and a billiard-room. The church was beautifully situated in a recess of the mountain."

In 1905, the Kangra valley suffered a major earthquake. On 4 April of that year, the earth shook, demolishing much of the cantonment and the neighbouring city of Kangra, Himachal Pradesh as well as the Bhagsunag temple. Altogether, the 1905 Kangra earthquake killed 20,000 people. "1,625 persons perished at Dharamsāla alone, including 15 Europeans and 112 of the Gurkha garrison."

The Gurkhas rebuilt the town along with the temple, which today is acknowledged as the 1st Gurkha Rifles' heritage. The British had planned to make Dharamshala the summer capital of India, but moved to Shimla after the disaster.

Not only did the Gurkhas of Dharmshala make a major contribution to India's defence, many were freedom fighters for the Indian National Army, which had been founded by Netaji Subhas Chandra Bose. The Indian National Army Captain Ram Singh Thakur, a Gurkha from the village of Khanyara, composed some of India's most popular and stirring patriotic songs, including "Kadam Kadam Badaye Ja". He is acknowledged so by the Netaji Research Bureau, Kolkata. The important contribution of the noted Gurkha social commentator, the late Master Mitrasen Thapa, from the village of Totarani, has been acknowledged by the Himachal Pradesh government. Recently, a park dedicated to the memory of the late Brigadier Sher Jung Thapa, MVC, the 'Hero of Skardu', has been opened alongside the road between Lower and Upper Dharamshala. 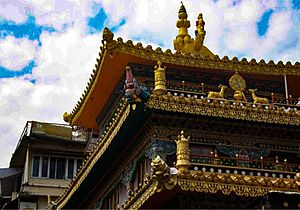 The architecture in Dharamsala has a Buddhist influence

The Tibetan settlement of Dharamshala began in 1959, when the Dalai Lama had to flee Tibet and the Prime Minister of India, Jawaharlal Nehru, allowed him and his followers to settle in McLeodGanj (in Upper Dharmshala), a former colonial British summer picnic spot. "Nehru was delighted with the 'forgotten ghost-town wasting in the woods', and offered it to the Dalai Lama." There they established the "government-in-exile" in 1960 and the Namgyal Monastery. Dharamshala had been connected with Hinduism and Buddhism for a long time, many monasteries having been established there in the past, by Tibetan immigrants in the 19th century.

In 1970, The Dalai Lama, Tenzin Gyatso, opened the Library of Tibetan Works and Archives which houses over 80,000 manuscripts and other important resources related to Tibetan history, politics and culture. It is considered one of the most important institutions for Tibetology in the world, the new director is Geshe Lahkdor, the old translator of the Dalai Lama. 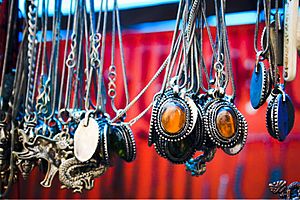 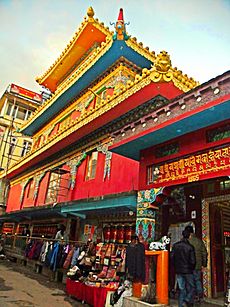 Kalachakra Temple in the main street of Mcleod ganj

Several thousand Tibetan exiles have now settled in the area; most live in and around McLeodGanj in Upper Dharamshala, where they have built monasteries, temples and schools. It has become an important tourist destination with many hotels and restaurants, leading to growth in tourism and commerce.

Dharamshala is the winter capital of Himachal Pradesh. The Legislative Assembly is at Sidhbari, near the Chinmaya Tapovan Ashram, and the winter sessions of the government are held there. Dharamshala is also one of the famous bird watching spots in India.

Dharamshala also has lush tea gardens that produce its popular Kangra tea. Traditionally known for Kangra green tea, Dharamshala now produces a variety of teas, including black, green, oolong and white teas, along with Kashmiri Kahwa and Masala Chai. Tea gardens at Mann Tea Estate are owned and operated by the Dharmsala Tea Company, which conducts guided tours of the tea gardens and factory, and offers tea tastings. Kangra green tea is considered to be among the best in India, and has also been found to contain the highest anti-oxidant levels of all green teas produced in India.

All content from Kiddle encyclopedia articles (including the article images and facts) can be freely used under Attribution-ShareAlike license, unless stated otherwise. Cite this article:
Dharamshala Facts for Kids. Kiddle Encyclopedia.