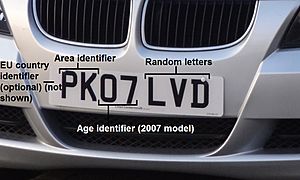 A vehicle registration plate is a metal or plastic plate on a motor vehicle or trailer. It is used for official identification purposes. There is a numeric or alphanumeric (meaning that the code is made up of numbers and letters) code that identifies the vehicle. In some countries, the identifier is unique in the entire country. In other countries, it is unique in a state or province. Sometimes the identifier is for a person and sometimes for a vehicle. Each country calls a vehicle registration plate something different. Some examples are license plate or tag (US), licence plate (Canada), number plate or registration plate (UK).

All content from Kiddle encyclopedia articles (including the article images and facts) can be freely used under Attribution-ShareAlike license, unless stated otherwise. Cite this article:
Vehicle registration plate Facts for Kids. Kiddle Encyclopedia.