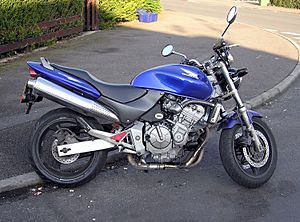 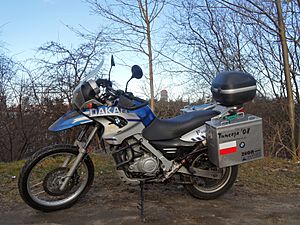 In 1901, the first successful motorcycle was made by "Indian" motorcycles in Springfield, Massachusetts. Since then, many other companies have made them. Major manufacturers include Honda, Suzuki, Yamaha. A well known American manufacturer of motorcycles is Harley-Davidson.

Since motorcycles can be lighter than cars, they can accelerate more quickly. But it also makes them not as safe as cars, because they do not have a protecting chassis around them like cars. Very often motorcycle riders are injured heavily in accidents. A motorcycle rider can wear a helmet and clothing that has armor. This special clothing may reduce the rider's injuries in an accident. Motorcycles also do not protect riders against wind and rain. That makes it difficult to drive in winter or during bad weather. 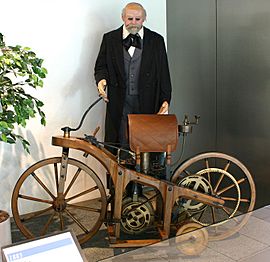 Replica of the Daimler-Maybach Reitwagen.

The first internal combustion, petroleum fueled motorcycle was the Daimler Reitwagen. It was designed and built by the German inventors Gottlieb Daimler and Wilhelm Maybach in Bad Cannstatt, Germany in 1885. This vehicle was unlike either the safety bicycles or the boneshaker bicycles of the era in that it had zero degrees of steering axis angle and no fork offset, and thus did not use the principles of bicycle and motorcycle dynamics developed nearly 70 years earlier. Instead, it relied on two outrigger wheels to remain upright while turning.

The inventors called their invention the Reitwagen ("riding car"). It was designed as an expedient testbed for their new engine, rather than a true prototype vehicle. 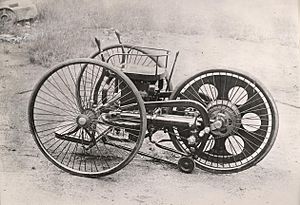 The first commercial design for a self-propelled cycle was a three-wheel design called the Butler Petrol Cycle, conceived of Edward Butler in England in 1884. He exhibited his plans for the vehicle at the Stanley Cycle Show in London in 1884. The vehicle was built by the Merryweather Fire Engine company in Greenwich, in 1888.

The Butler Petrol Cycle was a three-wheeled vehicle, with the rear wheel directly driven by a 5⁄8 hp (0.47 kW), 40 cc (2.4 cu in) displacement, 2 1⁄4 in × 5 in (57 mm × 127 mm) bore × stroke, flat twin four-stroke engine (with magneto ignition replaced by coil and battery) equipped with rotary valves and a float-fed carburettor (five years before Maybach) and Ackermann steering, all of which were state of the art at the time. Starting was by compressed air. The engine was liquid-cooled, with a radiator over the rear driving wheel. Speed was controlled by means of a throttle valve lever. No braking system was fitted; the vehicle was stopped by raising and lowering the rear driving wheel using a foot-operated lever; the weight of the machine was then borne by two small castor wheels. The driver was seated between the front wheels. It wasn't, however, a success, as Butler failed to find sufficient financial backing.

If a two-wheeled vehicle with steam propulsion is considered a motorcycle, then the first motorcycles built seem to be the French Michaux-Perreaux steam velocipede which patent application was filled in December 1868, constructed around the same time as the American Roper steam velocipede, built by Sylvester H. Roper Roxbury, Massachusetts. who demonstrated his machine at fairs and circuses in the eastern U.S. in 1867, Roper built about 10 steam cars and cycles from the 1860s until his death in 1896. 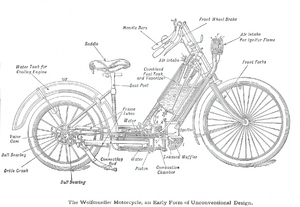 In 1894, Hildebrand & Wolfmüller became the first series production motorcycle, and the first to be called a motorcycle (German: Motorrad). Excelsior Motor Company, originally a bicycle manufacturing company based in Coventry, England, began production of their first motorcycle model in 1896. The first production motorcycle in the US was the Orient-Aster, built by Charles Metz in 1898 at his factory in Waltham, Massachusetts.

In the early period of motorcycle history, many producers of bicycles adapted their designs to accommodate the new internal combustion engine. As the engines became more powerful and designs outgrew the bicycle origins, the number of motorcycle producers increased. Many of the nineteenth century inventors who worked on early motorcycles often moved on to other inventions. Daimler and Roper, for example, both went on to develop automobiles.

At the turn of the 19th century the first major mass-production firms were set up. In 1898, Triumph Motorcycles in England began producing motorbikes, and by 1903 it was producing over 500 bikes. Other British firms were Royal Enfield, Norton and Birmingham Small Arms Company who began motorbike production in 1899, 1902 and 1910, respectively. Indian began production in 1901 and Harley-Davidson was established two years later. By the outbreak of World War I, the largest motorcycle manufacturer in the world was Indian, producing over 20,000 bikes per year. 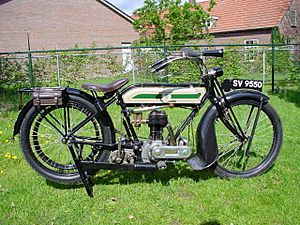 Triumph Motorcycles Model H, mass-produced for the war effort and notable for its reliability

During the First World War, motorbike production was greatly ramped up for the war effort to supply effective communications with front line troops. Messengers on horses were replaced with despatch riders on motorcycles carrying messages, performing reconnaissance and acting as a military police. American company Harley-Davidson was devoting over 50% of its factory output toward military contract by the end of the war. The British company Triumph Motorcycles sold more than 30,000 of its Triumph Type H model to allied forces during the war. With the rear wheel driven by a belt, the Model H was fitted with a 499 cc (30.5 cu in) air-cooled four-stroke single-cylinder engine. It was also the first Triumph without pedals.

The Model H in particular, is regarded by many as having been the first "modern motorcycle". Introduced in 1915 it had a 550 cc side-valve four-stroke engine with a three-speed gearbox and belt transmission. It was so popular with its users that it was nicknamed the "Trusty Triumph." 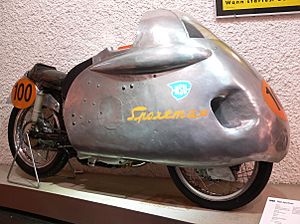 In the 1950s, streamlining began to play an increasing part in the development of racing motorcycles and the "dustbin fairing" held out the possibility of radical changes to motorcycle design. NSU and Moto Guzzi were in the vanguard of this development, both producing very radical designs well ahead of their time. NSU produced the most advanced design, but after the deaths of four NSU riders in the 1954–1956 seasons, they abandoned further development and quit Grand Prix motorcycle racing.

Moto Guzzi produced competitive race machines, and by 1957 nearly all the Grand Prix races were being won by streamlined machines. The following year, 1958, full enclosure fairings were banned from racing by the FIM in the light of the safety concerns.

From the 1960s through the 1990s, small two-stroke motorcycles were popular worldwide, partly as a result of East German MZs Walter Kaaden's engine work in the 1950s. 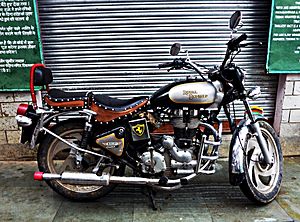 In the 21st century, the motorcycle industry is mainly dominated by the Indian motorcycle industry and by Japanese motorcycle companies. In addition to the large capacity motorcycles, there is a large market in smaller capacity (less than 300 cc) motorcycles, mostly concentrated in Asian and African countries and produced in China and India. A Japanese example is the 1958 Honda Super Cub, which went on to become the biggest selling vehicle of all time, with its 60 millionth unit produced in April 2008. Today, this area is dominated by mostly Indian companies with Hero MotoCorp emerging as the world's largest manufacturer of two wheelers. Its Splendor model has sold more than 8.5 million to date. Other major producers are Bajaj and TVS Motors.

Motocross is a form of motorcycle racing. It is on an off-road circuit. The sport came from motorcycle trials competitions held in the United Kingdom.

All content from Kiddle encyclopedia articles (including the article images and facts) can be freely used under Attribution-ShareAlike license, unless stated otherwise. Cite this article:
Motorcycle Facts for Kids. Kiddle Encyclopedia.