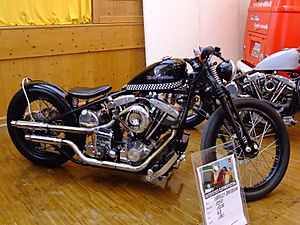 Harley-Davidson, or H-D for short, is an American motorcycle maker that started making motorcycles in Milwaukee in 1903. The company makes heavyweight motorcycles that are designed for cruising on the highway; they're called Harleys. Harley-Davidson is one of two big U.S. companies that made motorcycles that was still in business after the Great Depression; the other closed down in 1953.

William S. Harley, Arthur Davidson, William A. Davidson and Walter Davidson, Sr. were inducted into the Labor Hall of Honor. They were given the award for their good work for the H-D company and its workforce.

Modern Harley-branded motorcycles fall into one of five model families: Touring, Softail, Dyna, Sportster and Vrod. These model families are distinguished by the frame, engine, suspension, and other characteristics. 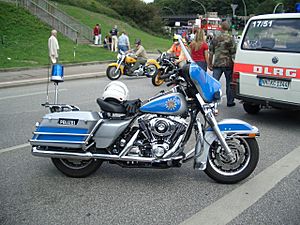 The touring family, also known as "dressers", includes Road King, Road Glide, and Electra Glide models offered in various trim. The Road Kings have a "retro cruiser" appearance and are equipped with a large clear windshield. Road Kings are reminiscent of big-twin models from the 1940s and 1950s. Electra Glides can be identified by their full front fairings. Most Electra Glides sport a fork-mounted fairing referred to as the "Batwing" due to its unmistakable shape. The Road Glide and Road Glide Ultra Classic have a frame-mounted fairing, referred to as the "Sharknose". The Sharknose includes a unique, dual front headlight.

Touring models are distinguishable by their large saddlebags, rear coil-over air suspension and are the only models to offer full fairings with Radios/CBs. All touring models use the same frame, first introduced with a Shovelhead motor in 1980, and carried forward with only modest upgrades until 2009, when it was extensively redesigned. The frame is distinguished by the location of the steering head in front of the forks and was the first H-D frame to rubber mount the drivetrain to isolate the rider from the vibration of the big V-twin.

The frame was modified for the 1994 model year when the oil tank went under the transmission and the battery was moved inboard from under the right saddlebag to under the seat. In 1997, the frame was again modified to allow for a larger battery under the seat and to lower seat height. In 2007, Harley introduced the 96-cubic-inch (1,570 cc) engine, as well the six-speed transmission to give the rider better speeds on the highway.

In 2006, Harley introduced the FLHX Street Glide, a bike designed by Willie G. Davidson to be his personal ride, to its touring line.

For the 2009 model year, Harley-Davidson has redesigned the entire touring range with several changes, including a new frame, new swingarm, a completely revised engine-mounting system, 17-inch (430 mm) front wheels for all but the FLHRC Road King Classic, and a 2–1–2 exhaust. The changes result in greater load carrying capacity, better handling, a smoother engine, longer range and less exhaust heat transmitted to the rider and passenger. Also released for the 2009 model year is the FLHTCUTG Tri-Glide Ultra Classic, the first three-wheeled Harley since the Servi-Car was discontinued in 1973. The model features a unique frame and a 103-cubic-inch (1,690 cc) engine exclusive to the trike. 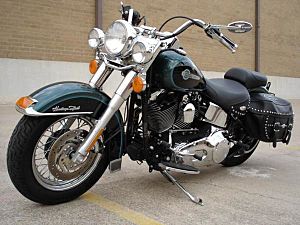 These big-twin motorcycles capitalize on Harley's strong value on tradition. With the rear-wheel suspension hidden under the transmission, they are visually similar to the "hardtail" choppers popular in the 1960s and 1970s, as well as from their own earlier history. In keeping with that tradition, Harley offers Softail models with "Springer" front ends and "Heritage" styling that incorporate design cues from throughout their history. 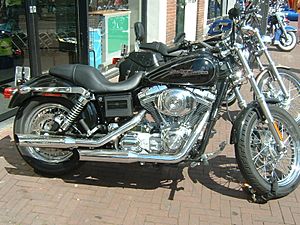 Dyna-frame motorcycles were developed in the 1980s and early 1990s and debuted in the 1991 model year with the FXDB Sturgis offered in limited edition quantities. In 1992 the line continued with the limited edition FXDB Daytona and a production model FXD Super Glide. The new DYNA frame featured big-twin engines and traditional styling. They can be distinguished from the Softail by the traditional coil-over suspension that connects the swingarm to the frame, and from the Sportster by their larger engines. On these models, the transmission also houses the engine's oil reservoir.

Prior to 2008, Dyna models typically featured a narrow, XL-style front fork and front wheel, which the manufacturer included the letter "X" in the model designation to indicate. This lineup traditionally included the Super Glide (FXD), Super Glide Custom (FXDC), Street Bob (FXDB), and Low Rider (FXDL). One exception was the Wide Glide (FXDWG), which maintained the thickness of the XL forks and a narrow front wheel, but positioned the forks on wider triple-trees that give a beefier appearance. In 2008, the Dyna Fat Bob (FXDF) was introduced to the Dyna lineup, featuring aggressive styling like a new 2–1–2 exhaust, twin headlamps, a 180 mm rear tire, and, for the first time in the Dyna lineup, a 130 mm front tire. For the 2012 model year, the Dyna Switchback (FLD) became the first Dyna to break the tradition of having an FX model designation: with the fatter fork tubes, wide front tire, and full fender, this new front end resembled the big-twin FL models from previous decades better than the XL. 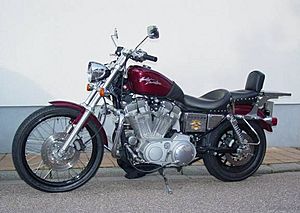 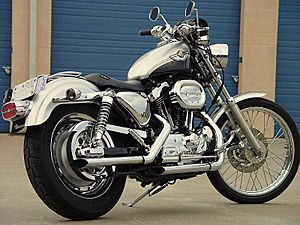 Introduced in 1957, the Sportster family were conceived as racing motorcycles, and were popular on dirt and flat-track race courses through the 1960s and 1970s. Smaller and lighter than the other Harley models, contemporary Sportsters make use of 883 cc or 1,200 cc Evolution engines and, though often modified, remain similar in appearance to their racing ancestors.

Up until the 2003 model year, the engine on the Sportster was rigidly mounted to the frame. The 2004 Sportster received a new frame accommodating a rubber-mounted engine. Although this made the bike heavier and reduced the available lean angle, it reduced the amount of vibration transmitted to the frame and the rider. The rubber mounted engine provides a significantly smoother ride for rider and passenger, allowing longer trips.

In the 2007 model year, Harley-Davidson celebrated the 50th anniversary of the Sportster and produced a limited edition called the XL50, of which only 2000 were made for sale worldwide. Each motorcycle was individually numbered and came in one of two colors, Mirage Pearl Orange or Vivid Black. Also in 2007, electronic fuel injection was introduced to the Sportster family, and the Nightster model was introduced in mid-year. In 2009, Harley-Davidson added the Iron 883 to the Sportster line, the newest in the Dark Custom series.

In the 2008 model year, Harley-Davidson released the XR1200 Sportster in Europe, Africa, and the Middle East. The XR1200 had an Evolution engine tuned to produce 91 bhp (68 kW), four-piston dual front disc brakes, and an aluminum swing arm. Motorcyclist featured the XR1200 on the cover of its July 2008 issue and was generally positive about it in their "First Ride" story, in which Harley-Davidson was repeatedly asked to sell it in the United States. One possible reason for the delayed availability in the United States was the fact that Harley-Davidson had to obtain the "XR1200" naming rights from Storz Performance, a Harley customizing shop in Ventura, Calif. The XR1200 was released in the United States in 2009 in a special color scheme including Mirage Orange highlighting its dirt-tracker heritage. The first 750 XR1200 models in 2009 were pre-ordered and came with a number 1 tag for the front of the bike, autographed by Kenny Coolbeth and Scott Parker and a thank you/welcome letter from the company, signed by Bill Davidson. 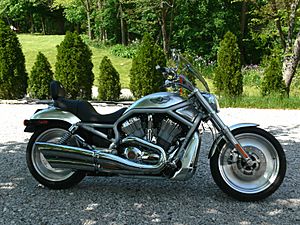 V-Rod in a gravel driveway.

Introduced in 2001, the VRSC family bears little resemblance to Harley's more traditional lineup. Competing against Japanese and American muscle bikes and seeking to expand its market appeal, the "V-Rod" makes use of an engine developed jointly with Porsche that, for the first time in Harley history, incorporates overhead cams and liquid cooling. The V-Rod is visually distinctive, easily identified by the 60-degree V-Twin engine, the radiator and the hydroformed frame members that support the round-topped air cleaner cover. Based on the VR-1000 racing motorcycle, it continues to be a platform around which Harley-Davidson builds drag-racing competition machines.

In 2008, Harley added the anti-lock braking system as a factory installed option on all VRSC models. Harley also increased the displacement of the stock engine from 1,130 to 1,250 cc (69 to 76 cu in), which had only previously been available from Screamin' Eagle, and added a slipper clutch as standard equipment.

The VRXSE V-Rod Destroyer is Harley-Davidson's production drag racing motorcycle, constructed to run the quarter mile in under ten seconds. It is based on the same revolution engine that powers the VRSC line, but the VRXSE uses the Sceamin' Eagle 1,300 cc "stroked" incarnation, featuring a 75 mm crankshaft, 105 mm Pistons, and 58 mm throttle bodies.

The V-Rod Destroyer is not a street legal motorcycle.

All content from Kiddle encyclopedia articles (including the article images and facts) can be freely used under Attribution-ShareAlike license, unless stated otherwise. Cite this article:
Harley-Davidson Facts for Kids. Kiddle Encyclopedia.