Kids Encyclopedia Facts
This page is about the Pennsylvania city. For other uses, see York, Pennsylvania (disambiguation). 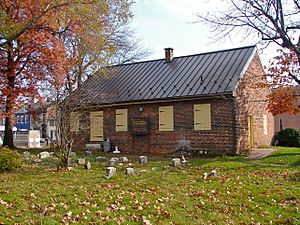 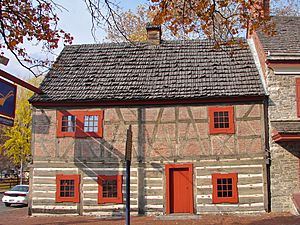 York, also known as Yorktown in the mid 18th to early 19th centuries, was founded in 1741 by settlers from the Philadelphia region and named for the English city of the same name. By 1777, most of the area residents were of either German or Scots-Irish descent. York was incorporated as a borough on September 24, 1787, and as a city on January 11, 1887. During the American Revolutionary War (1775–1783), York served as the temporary capital of the Continental Congress. The Articles of Confederation were drafted and adopted in York, though they were not ratified until March 1781.

York styles itself the first Capital of the United States, although historians generally consider it to be the fourth capital, after Philadelphia, Baltimore and Lancaster. The claim arises from the assertion that the Articles of Confederation was the first legal document to refer to the colonies as "the United States of America". The argument depends on whether the Declaration of Independence, which also uses the term, would be considered a true legal document of the United States, being drafted under and in opposition to British rule. This does not, however, prevent modern businesses and organizations in the York area, such as the First Capital Dispensing Co., First Capital Engineering and First Capital Federal Credit Union from using the name.

The Conway Cabal, a political intrigue against General George Washington, had its origins in the Golden Plough Tavern in York.

According to U.S. census reports from 1800 through 1840, York ranked within the nation's top 100 most populous urban areas. 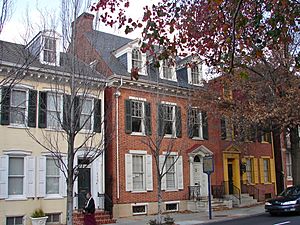 During the American Civil War (1861–1865), York became the largest Northern town to be occupied by the Confederate army when the division of Major General Jubal Anderson Early spent June 28–30, 1863, in and around the town while the brigade of John B. Gordon marched to the Susquehanna River at Wrightsville and back. Early laid York under tribute and collected food, supplies, clothing, shoes, and $28,000 in cash from citizens and merchants before departing westward obeying the revised orders of Robert E. Lee. The sprawling York U.S. Army Hospital on Penn Commons served thousands of Union soldiers wounded at the battles of Antietam and Gettysburg.

In the Postbellum era (1865–1877), York remained a regional center for local agriculture, but increasingly became an important industrial center, with such industries as steam engines, railroad manufacturing, and papermaking coming to the forefront. York also features some unique architecture ranging from colonial era buildings to large gothic churches.

The York Motor Car Co. built Pullman automobiles on North George St. from 1905 thorough 1917. An early and unique six-wheeled prototype was involved in one of the city's first known automobile accidents. Another model was driven to San Francisco and back over about one month to prove its reliability several years before the creation of the Lincoln Highway which ran through town, connecting New York and San Francisco.

The York area had also been home for more than 100 years to the Pfaltzgraff company, which built its first pottery factory in the area in 1895 and continued manufacturing in York until 2005. Though now produced by The Hershey Company, the York Peppermint Pattie was created in York in 1940.

Throughout the middle 20th Century, the black residents of the city were subject to hostile racial prejudice and social injustices. Between 1955 and 1970, the people of York experienced racial discrimination leading to riots, most notably the 1969 York Race Riot, which resulted in the death of Lily Allen and Henry C. Schaad. These murders were largely left ignored until 31 years later, when allegations of murder and racial prejudice were raised against the mayor at the time, Charlie Robertson. Additionally, throughout the entire century, the city commonly held unopposed Ku Klux Klan rallies and public meetings, despite continuous racial tensions. Though the murders of Allen and Schaad were solved and the perpetrators were apprehended, the actions, which originate back to the beginnings of the hate group, continue to present day.

In 2002, the city faced a budget shortfall of $1,000,000. Mayor John S. Brenner's plan to raise the money by asking York County's 302,000 adult residents to donate $3.32 to the city received national attention. The plan, referred to by some as the "Big Mac" Plan, did not raise all the monies sought.

After many years of attempting to secure funding for a stadium and a baseball team to play in it, the first decade of the century saw York realize both goals. In 2007, Santander Stadium, home of the York Revolution, opened in the Arch Street neighborhood. The stadium, along with other large projects such as the York County Judicial Center and the Codo 241 luxury apartment lofts, symbolizes York's extensive redevelopment efforts

York was featured during the 2008 U.S. Presidential Election, when National Public Radio's Michele Norris and Steve Inskeep chose to showcase the city in "The York Project: Race & the '08 Vote." The program was aired as a 7-part series and featured different York citizens discussing race relations, racial perceptions, and the emotions inspired by the 2008 election. Norris stated that York was chosen due to its central location in a battleground state, its rich history (including its strained race relations), and demographics. On June 19, 2009, Norris announced on the air that she was taking time off to write a book inspired by her conversations "with a diverse group of voters" in York, and The Grace of Silence: A Memoir was published in September 2010.

In 2009, Kim Bracey won the Democratic primary and became the favored candidate for mayor. She won the general election in November against Republican opponent Wendell Banks and took office on the first Monday in 2010 as the city's first African-American and second woman mayor. Bracey won reelection in November 2013 against Libertarian challenger Dave Moser. 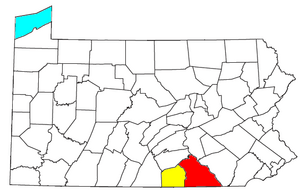 Much of York's culture represents the city's evolving role as an agricultural and industrial center. The historic York Fair, which claims to be the country's oldest, traces its roots to 1765. It runs every year in September for 10 days, encompassing an entire week and two weekends. In addition to typical fair attractions, such as rides, games and contests, it also wins regional recognition for hosting many (usually country) musical artists, such as Alabama, Gretchen Wilson, Carrie Underwood, Toby Keith, and Lynyrd Skynyrd.

The fairgrounds, branded the York Expo Center, also hosts the annual National Street Rod Association Street Rod Nationals East, the largest annual street rod event in the Eastern US. The event brings thousands of street rods into the city for a few days in June. On Friday afternoon the city holds a parade through the center of the city for participating vehicles.

York City Recreation and Parks helps sponsor the Olde York Street Fair each year on Mothers Day, the second Sunday of May – a tradition since the early 1980s. In recent years more than 150 art, craft and food vendors have lined Market and George streets. Average attendance was 60,000 people as of 2004, according to city officials. 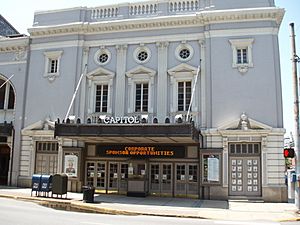 York is home to the York Little Theatre and to the Strand-Capitol Performing Arts Center, which brings many nationally acclaimed acts to the York area. Performers here have included Kenny G, Bill Cosby, B.B. King, Béla Fleck, and George Carlin. The historic Capitol Theatre also features many independent and foreign films, making it the only venue in York (and sometimes the entire Susquehanna Valley) to feature some rare, yet critically acclaimed films. The Strand Studio has also branched out from the recently Renovated Strand-Capitol Performing Arts Center. The Studio offers live music, usually jazz & acoustic, for the community.

The York County History Center (YCHC) is a not-for-profit educational institution that preserves and uses its collections, historic sites and museums to inspire people to explore the history and culture of York County, Pennsylvania. YCHC maintains eight historical sites that preserve and present 300 years of York County's rich and diverse history. The YCHC was founded in 1999 after a merger of the Historical Society of York County and the Agricultural and Industrial Museum of York County (AIM). Currently, the YCHC historical sites include the Worker's House (c. 1875), Golden Plough Tavern (c.1741), the Barnett Bobb Log House (1812), the Bonham House (c.1885) and old Eastern Market House (c.1886). In 1992, AIM acquired an industrial complex consisting of six buildings (c.1874 to 1955); three of the buildings were renovated and now house the industrial portion of the collection. The YCHC hosts a variety of events throughout the year, and holds the rights to the Murals of York, PA, a group of murals that depict York's rich history. The History Center purchased a former Met-Ed steam plant in York in late 2015, and has plans to turn it into a new history center. In 2016, what was the York County Heritage Trust rebranded as the York County History Center.

The York Factory Whistle holds the world record for the loudest music without amplification from a non-musical instrument. Every Christmas Eve the whistle uses a compressor to create air pressure, then releases it through a series of tubes using a device much like a slide whistle. (Prior to 2010, the pressure was created using steam produced by a boiler.) The music had a loudness of 140 dB and can be heard 10 to 12 miles away with proper weather conditions. Various Christmas music is played for a short time around midnight. It is thought that this annual tradition was started around 1925. After the hosting New York Wire Cloth Company plant closed in 2013, Metso moved the whistle to their factory in York and the annual concert tradition has continued. Metso announced in August 2015 that it would close its York plant by the end of March 2016. Organizers hope to be able to hold the 2016 whistle concert at the same location.

The alternative rock band Live is from York. Many of Live's songs are about the town including "Shit Towne" from their most successful album Throwing Copper.

York is home to many veteran as well as up-and-coming talented artists and musicians from all genres including funk, blues, jazz, rock, experimental, country, and bluegrass. The rock band Hexbelt is known for its brand of "Susquehanna Hexbelt Swing" music. York hosts a variety of open mics and underground venues such as the Sign of the Wagon and The Depot. 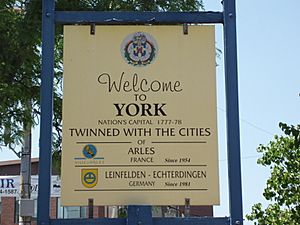 York is officially twinned with:

York is served, through public transportation, by Rabbit Transit, which operates multiple bus routes in the city and the surrounding suburbs. In 2006 a rabbitEXPRESS bus route was established to transport commuters to Harrisburg and back, making six round trips weekdays. Rabbit Transit introduced a new route on February 2, 2009 that provides three daily round trips between York and Timonium, Maryland. The $5 fare each way covers 80% of the operating costs.

Rail enthusiasts have suggested commuter rail service could be started between York and Philadelphia with much of the necessary infrastructure already in place, using SEPTA's system. Transportation planners say this is too expensive, with bus and van services more feasible. The former Pennsylvania Railroad station for York now lies along the York County Heritage Rail Trail across from the baseball park.

York does not have any commercial airports, though the small York Airport (THV) is located 7 miles southwest in Thomasville. Many residents use either Baltimore-Washington International (BWI) or Harrisburg International Airport (MDT).

Lancaster, 24 miles to the east, has frequent Amtrak train service to Philadelphia.

York is the hometown of the protagonist of John Grisham's novel The Associate. At the book's end the protagonist happily abandons a well-paid but highly unpleasant job in a giant Wall Street law firm, returning to his hometown to work there with his lawyer father.

All content from Kiddle encyclopedia articles (including the article images and facts) can be freely used under Attribution-ShareAlike license, unless stated otherwise. Cite this article:
York, Pennsylvania Facts for Kids. Kiddle Encyclopedia.