Kids Encyclopedia Facts
Not to be confused with York City, Pennsylvania.

York County is a county in the U.S. state of Pennsylvania. As of the 2020 census, the population was 456,438. Its county seat is York. The county was created on August 19, 1749, from part of Lancaster County and named either after the Duke of York, an early patron of the Penn family, or for the city and county of York in England.

Based on the Articles of Confederation having been adopted in York by the Second Continental Congress on November 15, 1777, the local government and business community began referring to York in the 1960s as the first capital of the United States of America. The designation has been debated by historians ever since. Congress considered York, and the borough of Wrightsville, on the eastern side of York County along the Susquehanna River, as a permanent capital of the United States before Washington, D.C., was selected. 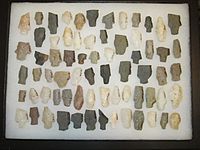 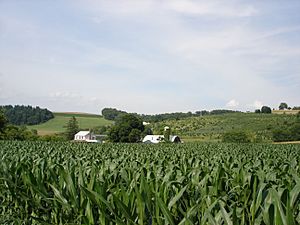 A farm in York County, Pennsylvania

York city had a 77.3 percent increase in the number of residents of Hispanic or Latino origin, based on a comparison of the 2000 and 2010 U.S. census results. The city's 30.9 percent Hispanic population (as of December 2017) is more than that of other places in the area. 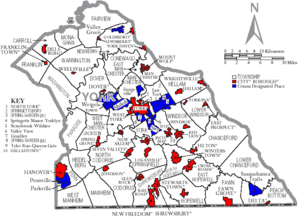 Under Pennsylvania law, there are four types of incorporated municipalities: cities, boroughs, townships, and, in at most two cases, towns. The following cities, boroughs and townships are in York County:

The population ranking of the following table is based on the 2010 census of York County. 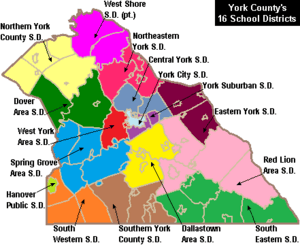 Lincoln Intermediate Unit (IU#12) region includes: Adams County, Franklin County and York County. The agency offers school districts, home schooled students and private schools many services including: special education services, combined purchasing, and instructional technology services. It runs Summer Academy which offers both art and academic strands designed to meet the individual needs of gifted, talented and high achieving students. Additional services include: Curriculum Mapping, Professional Development for school employees, Adult Education, Nonpublic School Services, Business Services, Migrant & ESL (English as a Second Language), Instructional Services, Management Services, and Technology Services. It also provides a GED program to adults who want to earn a high school diploma and literacy programs. The Lincoln Intermediate Unit is governed by a 13-member Board of Directors, each a member of a local school board from the 25 school districts. Board members are elected by school directors of all 25 school districts for three-year terms that begin the first day of July. There are 29 intermediate units in Pennsylvania. They are funded by school districts, state and federal program specific funding and grants. IUs do not have the power to tax.

All content from Kiddle encyclopedia articles (including the article images and facts) can be freely used under Attribution-ShareAlike license, unless stated otherwise. Cite this article:
York County, Pennsylvania Facts for Kids. Kiddle Encyclopedia.