Map of the original Mason–Dixon line

The Mason–Dixon line, also called Mason's and Dixon's line, originally determining the border between Maryland and Pennsylvania, was surveyed and marked between 1763 and 1767. Two English surveyors, Charles Mason and Jeremiah Dixon, were hired by the Penn and Calvert families to settle a border dispute. In 1760 the British crown, tired of the violence between the two colonies, demanded the dispute over the border between Maryland and Pennsylvania be settled according to an agreement made in 1732. The line the two surveyors came up with was so accurate it is still considered a marvel. GPS measurements show the line to be off by an inch or less in places and no more than 800 feet (240 m) in others. 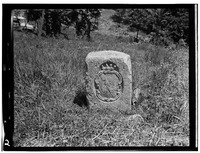 One of the original markers, this one in Adams County, Pennsylvania

England's Secretary of State under James I of England was George Calvert. When he decided to publicly announce he was a Catholic in 1625, English law required him to resign his position. The king made him an Irish baronet with the title of "Lord Baltimore". Calvert was one of the investors in the Virginia Company but was not allowed to go to the Virginia Colony because of his religion. Now retired and with time on his hands, Calvert turned his attention to overseas plantations. A wealthy man, Calvert started his own "Avalon" colony in Newfoundland. But by 1629 Calvert lost interest. He then convinced Charles I of England, James's successor, to give him a land grant to start the colony of Maryland. The king gave Calvert and his son everything north of the Potomac River to the 40th parallel and everything from the Atlantic Ocean to the source of the Potomac. The first Lord Calvert died in 1632. His sons went on to found the Maryland colony. On May 27th, 1634, Leonard Calvert with about 300 settlers arrived at St. Mary's City, Maryland on the Chesapeake Bay.

William Penn, a leading member of the Religious Society of Friends or Quakers, was one of those who was granted the colonial province of West New Jersey in 1677. While colonists settled there, Penn remained in England. Charles II of England owed Penn's father a large loan which at the elder Penn's death the king settled by granting Penn a large area of land "Sylvania" (Latin for woods) west and south of New Jersey. Charles renamed it Pennsylvania in honor of Penn's father. Perhaps Charles II was glad to have a place to send political outsiders like Penn that was far away from England. Issued on March 4, 1681, the boundaries of Pennsylvania were:

...all that tract or part of land in America, with the islands therein contained, as the same is bounded on the east by Delaware River, from twelve miles distance northward of New Castle Town, unto the three and fortieth degree of northern latitude, if the said river doth extend so far northward; but if said river shall not extend so far northward, then by the said river so far as it doth extend; and from the head of the said river, the eastern bounds are to be determined by a meridian line, to be drawn from the head of the said river, unto the said forty-third degree. The said land to extend westward five degrees in longitude, to be computed from the said eastern bounds, and the said lands to be bounded on the north by the beginning of the three and fortieth degree of northern latitude, and on the south by a circle drawn at twelve miles distance from New Castle, northward and westward unto the beginning of the fortieth degree of northern latitude, and then by a straight line westward to the limits of longitude above mentioned. 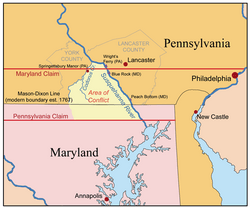 In 1682, an error in surveying placed Philadelphia inside the lands granted to Maryland. The two charters had overlapped. The Calvert family in Maryland demanded Philadelphia become a part of Maryland. The Penn family defended the error and in 1729 established Lancaster County, Pennsylvania partly in defense of the error.

Maryland hired a ruffian named Thomas Cresap to force the issue. He and his armed followers moved up the Susquehanna River from Havre de Grace, Maryland to the 40th parallel settling on the west bank of the river. From there they began harassing their Pennsylvania neighbors. They killed livestock and tore down fences. In 1732 the hostilities quieted down when the two colonies reached an agreement. But Lord Baltimore went back on the agreement two years later. Cresap and his men resumed raiding farms and telling Pennsylvania Quakers that if they wanted it stopped they would pay the taxes they owed Maryland.

The closest the dispute ever came to being a "war" was on November 23, 1736. A group of Scots-Irish men led by the Sheriff of Lancaster attacked Cresap's men. The Maryland ruffians were defeated with one being killed. Cresap was arrested and taken to Philadelphia. He remained in prison until August 1737 when the King ordered his release. He also ordered the two colonies to settle their dispute in the courts and not by fighting. An English high court ruled in 1750, in favor of Pennsylvania. The court stated that Maryland forfeited its charter rights when it agreed to the compromise in 1732. The new border was now at 39 degrees, 43 minutes, 26.3 seconds, north latitude based on the survey by Mason and Dixon.

Slavery and the Mason-Dixon line

In 1781, Pennsylvania abolished slavery. The original line became the rough dividing line between Southern slave states and Northern free states. The exception was Deleware which remained a slave state up to the American Civil War. Fifty years later the Missouri Compromise of 1820 established a line extending the Mason–Dixon line westward to the Ohio River. Then following the border of Ohio to the mouth of the river at the Mississippi River, then westward along 36 degrees 30 minutes North. The line began as a way to end a border dispute and became best known as the line separating slave and free states.

All content from Kiddle encyclopedia articles (including the article images and facts) can be freely used under Attribution-ShareAlike license, unless stated otherwise. Cite this article:
Mason–Dixon line Facts for Kids. Kiddle Encyclopedia.