Carroll County is located in the U.S. state of Maryland. As of the 2020 census, the population was 172,891. Its county seat is Westminster.

Carroll County was created in 1837 from parts of Baltimore and Frederick Counties, see Hundred (division). It was named for Charles Carroll of Carrollton (1737–1832), signer of the American Declaration of Independence.

During the American Civil War, the population of Carroll County was sharply divided between supporters of the Union and the Confederacy. In 1863, there were significant troop movements through the county as part of the Gettysburg campaign. On June 29, 1863, the cavalry skirmish known as Corbit's Charge was fought in the streets of Westminster, when two companies of Delaware cavalry attacked a much larger Confederate force under General J.E.B. Stuart.

In 2013 the Carroll County Board of Commissioners voted to make English the official language of the county. 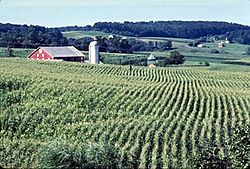 Topographically, Carroll County is located within the Piedmont Plateau region, with characteristic upland terrain of rolling hills and deciduous forest. The most prominent relief is Parr's Ridge, which bisects the county from southwest to northeast. The highest point is in the northeastern part of the county on Dug Hill along Deep Run Road.

Carroll County is bordered on the north by the Mason–Dixon line with Pennsylvania, and on the south by Howard County across the South Branch of the Patapsco River. About half of the eastern border, with Baltimore County, is formed by the North Branch of the Patapsco River and by Liberty Reservoir, though the northern half near Manchester and Hampstead is a land border. Carroll County is bordered on the west by Frederick County, across the Monocacy River and Sam's Creek. Other major streams in the county include Big Pipe Creek, Little Pipe Creek, and Double Pipe Creek, Bear Branch, and the headwaters of the Gunpowder Falls. The Piney Run Reservoir is in the southern part of the county.

JoS. A. Bank Clothiers has its headquarters in an unincorporated area in the county, near Hampstead.

The following is a list of principal employers in the county, as reported by the Maryland Department of Business and Economic Development from November 2014 data. This list excludes U.S. post offices and state and local governments, but includes public institutions of higher education.

The Carroll County Public Schools School system is the ninth largest school district in the state of Maryland.

Carroll Community College is a two-year community college serving the residents of Carroll County. It is located in Westminster, Maryland. 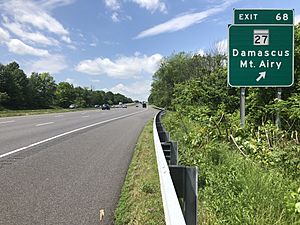 All content from Kiddle encyclopedia articles (including the article images and facts) can be freely used under Attribution-ShareAlike license, unless stated otherwise. Cite this article:
Carroll County, Maryland Facts for Kids. Kiddle Encyclopedia.