Frederick County is located in the northern part of the U.S. state of Maryland. As of the 2010 U.S. Census, the population was 240,336. The county seat is Frederick.

The namesake of Frederick County and its county seat is unknown, but it probably was either Frederick, Prince of Wales or Frederick Calvert, 6th Baron Baltimore.

Frederick County was created in 1748 from parts of Prince George's County and Baltimore County.

Frederick County straddles the boundary between the Piedmont Plateau Region and the Appalachian Mountains. The county's two prominent ridges, Catoctin Mountain and South Mountain, form an extension of the Blue Ridge. The Middletown Valley lies between them.

Attractions in the Frederick area include the Clustered Spires, a monument to Francis Scott Key, the National Museum of Civil War Medicine, Monocacy National Battlefield and South Mountain battlefields, and the Schifferstadt Architectural Museum.

Frederick County has experienced a rapid increase in population in recent years, including that of minority groups. 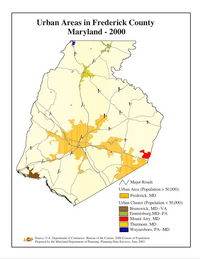 Frederick, the county seat and largest community in Frederick County.

The Census Bureau recognizes the following census-designated places in the county:

The United States Census Bureau has reported the following data for Frederick County.

According to the Maryland Department of Business and Economic Development, the following are the principal employers in Frederick County. This list excludes U.S. post offices and state and local governments, but includes public institutions of higher education.

Frederick County leads Maryland in milk production; the county's dairy herds account for one-third of the state's total. However, the dairy market is unstable, and the Frederick County, like the state more broadly, has lost dairy farms.

All content from Kiddle encyclopedia articles (including the article images and facts) can be freely used under Attribution-ShareAlike license, unless stated otherwise. Cite this article:
Frederick County, Maryland Facts for Kids. Kiddle Encyclopedia.